Marriott has a problem brewing after one of its employees at a Westin hotel in Germany allegedly refused to check in a guest wearing a Star of David necklace. 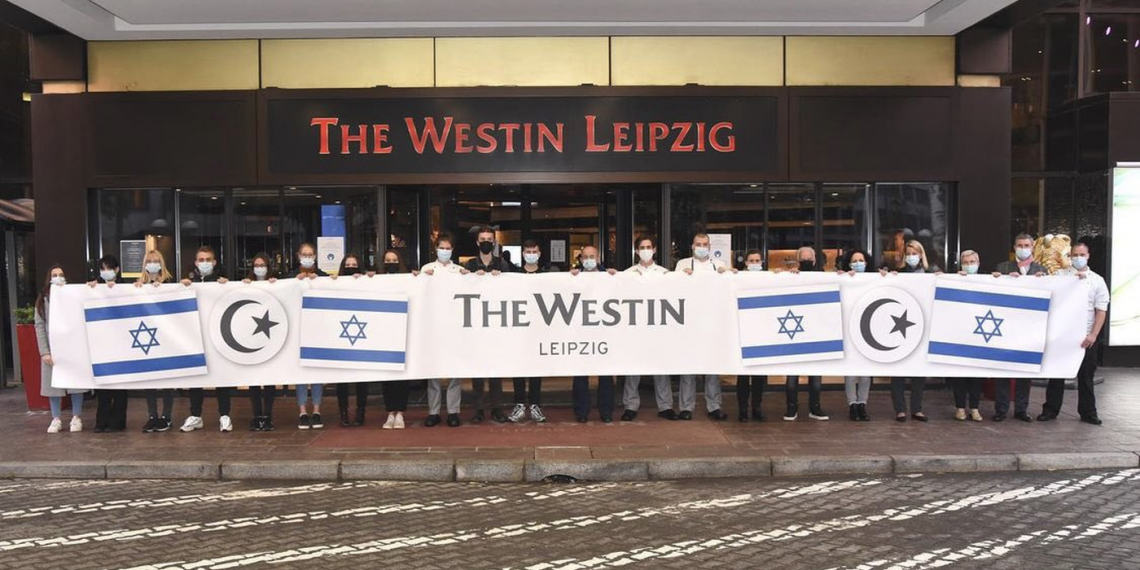 Two employees in question have been put on leave, and German authorities are investigating if this was antisemitism. Marriott has made it clear that the hotel is neither owned nor managed by them.

UPDATE: German police has now stated that they have serious doubts about Mr. Ofarim’s version of the events as stated in the video based on evidence reviewed since the incident. More on this in our OCT 17th update on the situation (access here).

A video that the German singer posted on Instagram:

There was a rally outside of the hotel on Tuesday evening, and the Westin thought it was a good idea to mix the Jewish and Muslim Symbols. The German media was also reporting that the hotel had hired a security company ties to Neo-Nazis to monitor the situation around the hotel.

The singer has yet to press charges, but one of the accused hotel employees has for defamation.

German prosecutors opened an investigation into employees at a hotel after a rock musician made accusations of anti-Semitism against them in a video posted on social media.

The singer Gil Ofarim said in an emotional video published Tuesday that two employees at the Westin hotel in Leipzig, in eastern Germany, had asked him to “put away” a Star of David pendant before he would be allowed to check in.

Two employees at the Westin were subsequently suspended while the accusations are investigated, a spokeswoman for the Marriott International hotel group said on Wednesday.

The employees who Ofarim has accused have been suspended “while we fully clarify the matter,” the hotel said in a statement, which called the accusations “unacceptable” and cause for great alarm.

Speaking to Bild TV, Ofarim confirmed that the hotel had reached out to his management to discuss the incident, but he said that this fell short of the apology he is looking for.

We are working closely with the third-party franchisee at The Westin Leipzig as they investigate these concerning reports. We take this matter extremely seriously.

The franchisee has advised us that two of their employees have now been suspended pending the investigation, and the hotel team is taking statements from all those who were present at the time so that we can all fully understand what happened. The franchisee remains in close contact with Mr Ofarim’s team.

Diversity and inclusion are central to the fabric of Marriott and we remain committed to providing an environment where all guests and staff are welcomed and respected. Whether in our managed or franchise properties, we strive to be inclusive, respectful and supportive of all, regardless of religion, race, gender, abilities or sexual orientation.

Very unfortunate and anti-Semitic incident if proven true by a Marriott hotel in Germany. I genuinely hope that this was just a case of misunderstanding.

It didn’t help that the Westin Leipzig’s management had trouble distinguishing between Judaism and Islam based on the banners they had up outside of the hotel on Tuesday night.

Perhaps it would be a good time for Marriott to sponsor a field trip for Westin Leipzig’s employees to the Auschwitz-Birkenau museum and memorial in Poland?