International Passengers who are in the process of leaving from Bangkok’s Suvarnabhumi Airport will be impacted by renovation efforts on the security check and passport control zones. 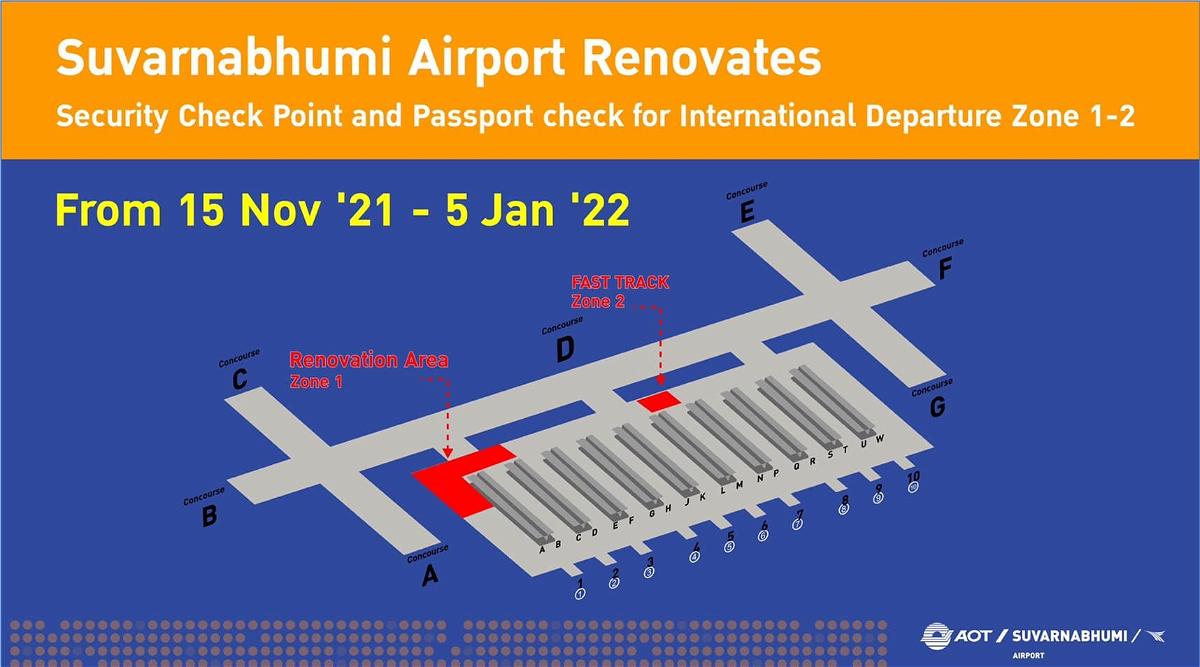 Airports of Thailand (AOT) has announced that they will close certain areas of the departure hall in order to facilitate the improvements over the next two months.

Despite the good intentions one begs the question why now all of a sudden after the airport has been pretty much deserted for the past 18 months. As soon as travel volume increases again they’re starting construction and shutting things down?

Suvarnabhumi Airport will make over the security check and passport control Zones 1-2 on the fourth floor of its passenger terminal as part of the on-going works to further enhance service quality.

The improvement at Thailand’s main air hub will be carried out between 15 November and 5 January 2022 in such a way that it will not affect departure international passengers, said Mr. Kittipong Kittikachorn, General Manager of Suvarnabhumi Airport.

Under the improvement, the security check point and international departure passport check point Zone 1 (behind the Row A check-in counter) will serve first class and premium passengers, air crew and those in need of special assistance.

On the other hand, the waiting area for passport check for international departure passenger at Zone 2 (Fast Track area) will be expanded.

​Following the makeover of Zone 1, the number of passport check counters will be increased to 13, from six currently; the waiting area for passport check will jump to 348 square metres (SQM), from 80 SQM now; and the processing capability of passport checks boosted to 660 per hour from 232 people at the moment.

Meanwhile, the waiting area for security screening will be doubled to 114 SQM from 50 SQM now, with three X-ray machines being added to the two currently in operation.
​However, during the renovation of the security checkpoint Zone 1, Royal First Class and Royal Silk Class passengers and air crew of Thai Airways International can make use of the Fast Track facility at Zone 2 instead temporarily.

Mr Kittipong noted that the improvement of security check in the Fast Track area of Zone 2 is aimed at turning it entirely into a service area for security and passport control for only economy class passengers. Eight passport control counters will be added there to bring the total number to 28, while the waiting area for passport check for departure passengers in Zone 2 will be expanded by 260 SQM to 860 SQM to tackle congestion problems in the terminal.

Suvarnabhumi has coordinated with all relevant units such as the Airline Operators Committee Thailand (AOC) and airlines about the renovations of Zone 1 and 2 which would take 52 days. It was agreed that the improvement should not affect the service of departure passengers because the areas will be gradually closed at a time and there are other areas set aside for the service.

Even though the passenger traffic through Suvarnabhumi is rising following the government’s policy to re-open to international visitors on 1 November, the airport expects the international departures to be much less that the pre-Covid level.

​Mr. Kittipong concluded that Suvarnbhumi Airport is committed to developing all aspects of services to increase the convenience of users. It makes sure that every action it has been taken will not affect the service standard under the ‘New Normal’ travel patterns in accordance with the public health measures Covid-Free Setting.

Increasing the space for these areas where security checks and passport control take place is definitely a good idea. While on arrival there is lots of open space in the rather large arrivals hall, the departure area on the 4th floor has lots of crammed spaces that are also quite poorly ventilated.

At the same time the location for the priority security and passport control isn’t great and won’t be after the renovation either, especially for those passengers who have to complete the VAT Refund procedure where the only counter to undergo the customs inspection is at the far end of the check-in hall, next to row W.

After that passengers have to go back to their their check-in counter or to their designated security/immigration checkpoint. An especially miserable experience for Thai Airways First & Business Class guests who are in for quite a marathon.

Should you depart from Bangkok Airport in the coming two months better expect a different experience when it comes to security and passport control, especially as a priority passenger.

Airports of Thailand has waiting until the recovery time of their 18 month shutdown to begin with renovation efforts at Bangkok’s Suvarnabhumi Airport. The new facilities will increase the space and capacity to process passengers and make the passenger flow a more comfortable experience.

Hard to say why they waited all this time to start now. This could have been completed without anyone being inconvenienced over the last one and a half years. When I flew out of Bangkok in July the Thai Airways priority security and immigration area in section A was already closed without any care in the world.