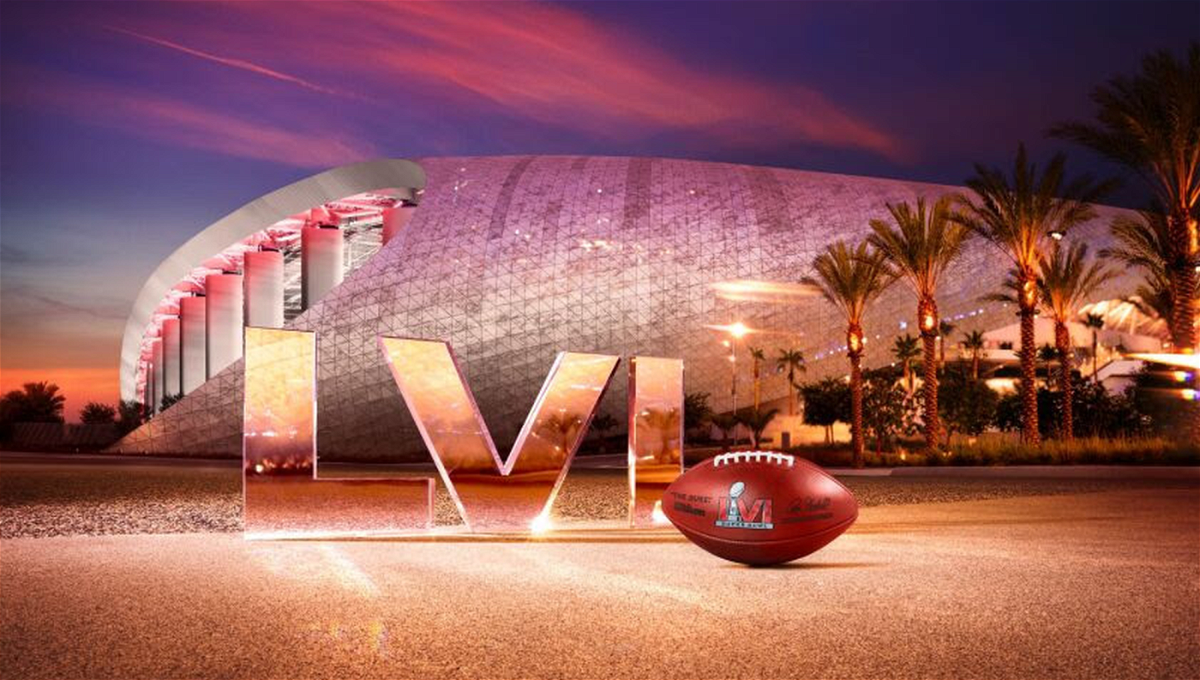 Moments is an experience platform that Marriott adopted from SPG. There are several experiences available for bidding in various countries. 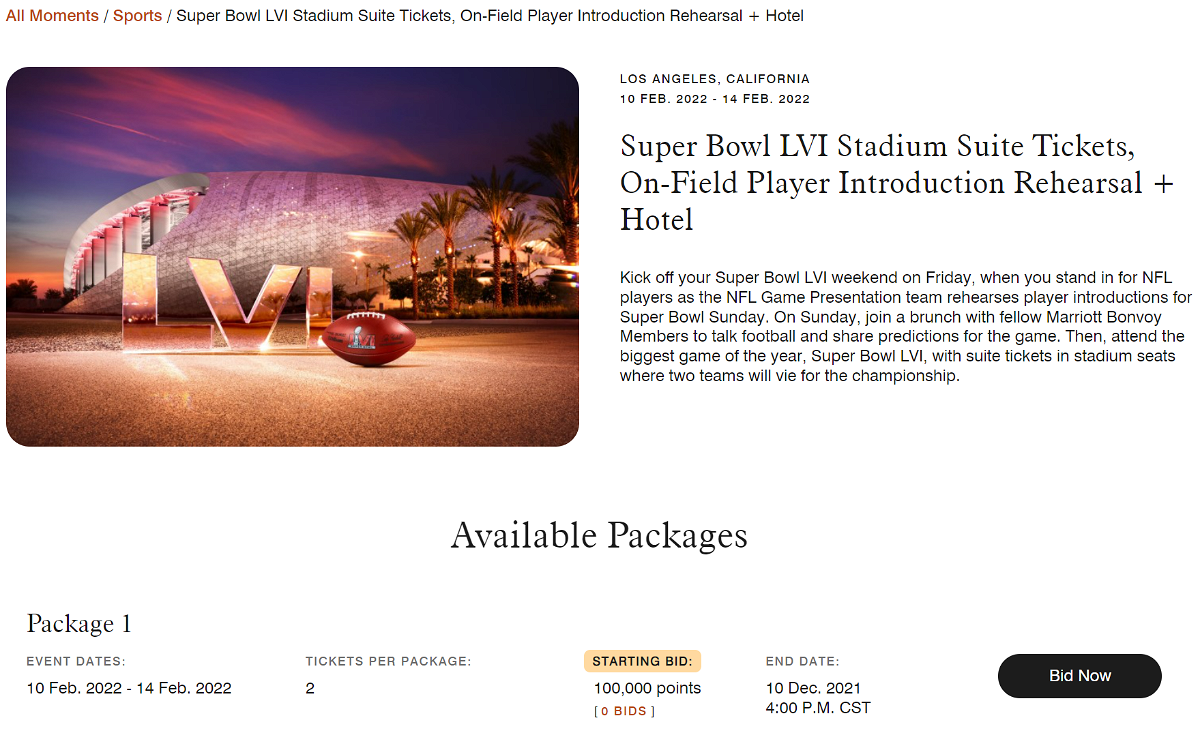 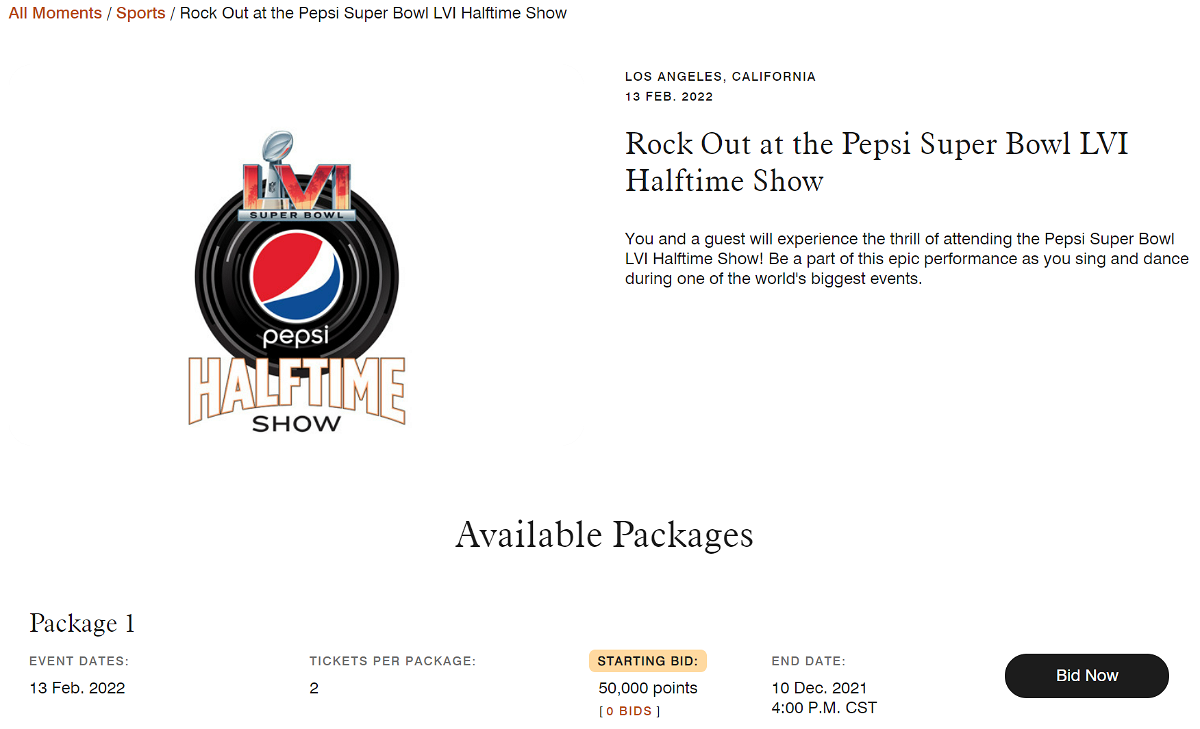 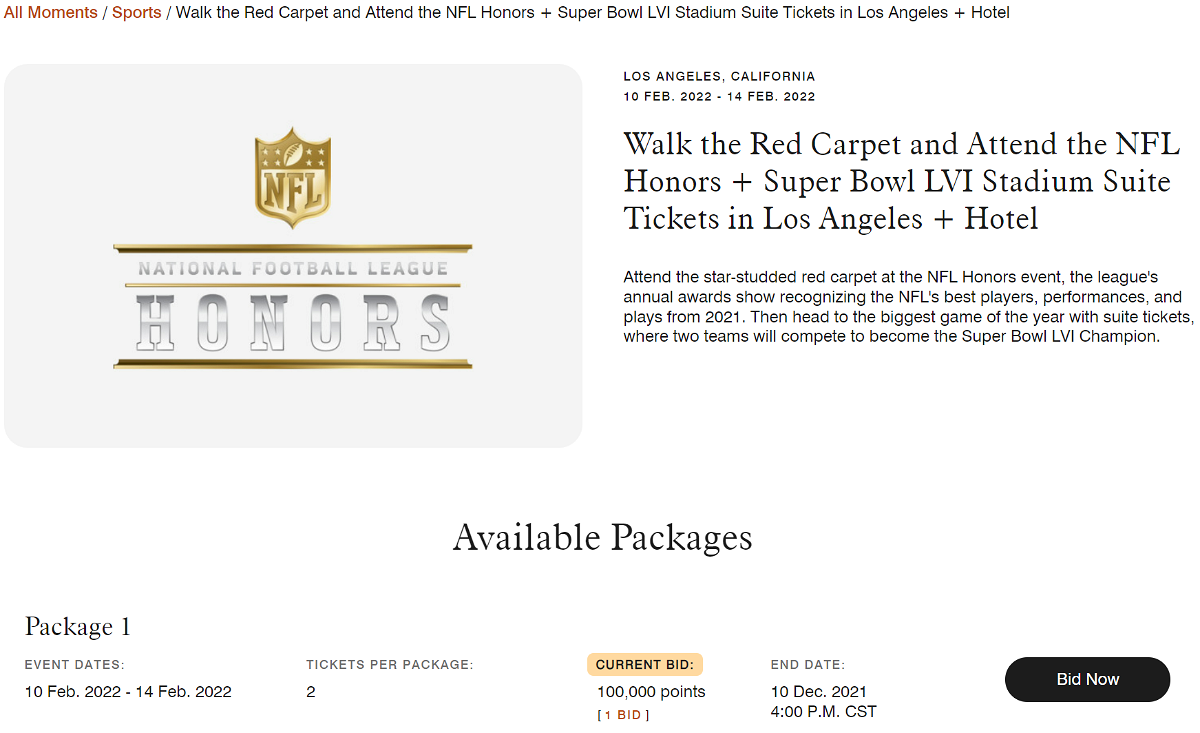 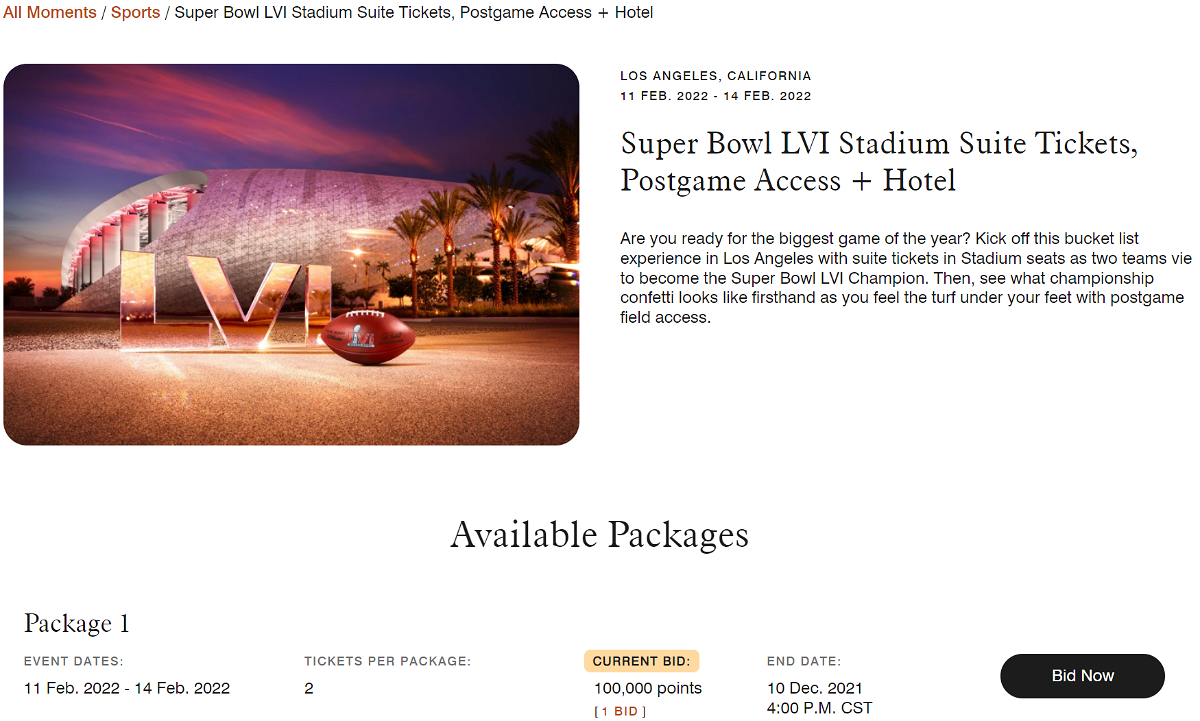 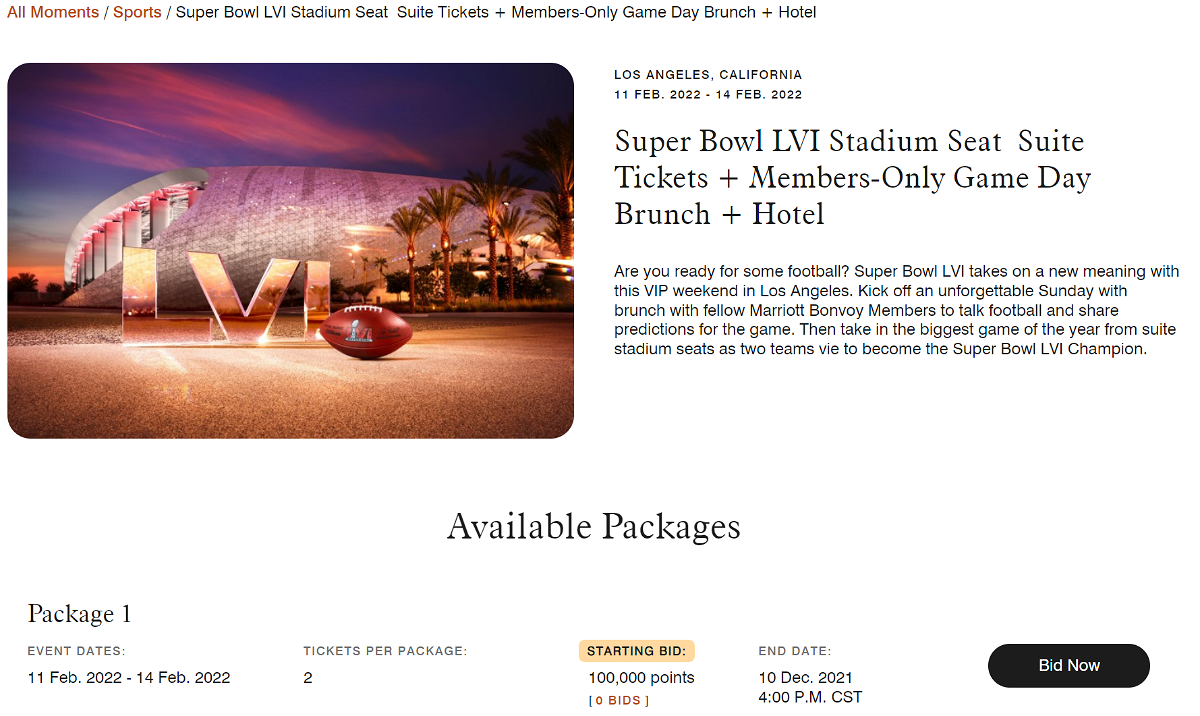 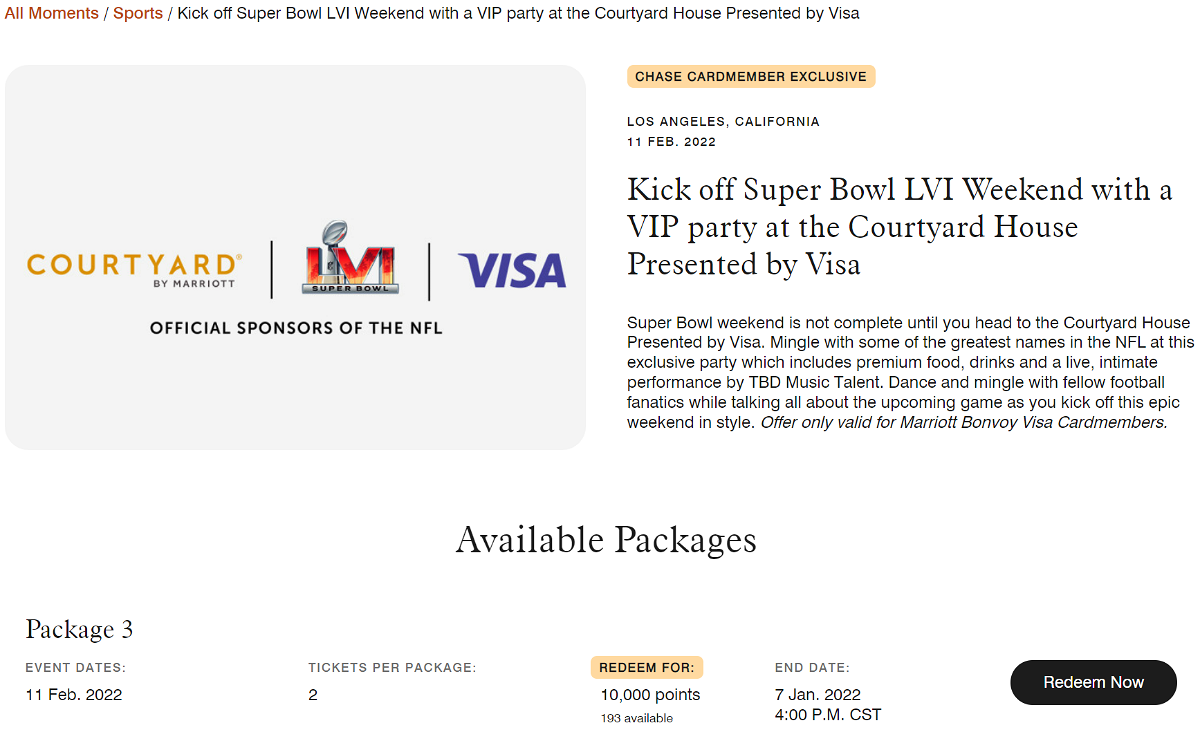 See and be seen with some of the greatest names in the NFL at this exclusive pre-game party which includes premium food, drinks and a live, intimate performance by a soon-to-be-announced artist. A select number of packages will include the opportunity to attend a private meet-and-greet with the artist during the party. Dance and mingle with fellow football fanatics while talking all about the upcoming game as you kick off this epic weekend in style. Members must be a Marriott Bonvoy Visa cardholder to redeem these packages.

Football fans have something to celebrate today as exclusive NFL Moments go live on the Marriott Bonvoy Moments platform. These money-can’t-buy packages allow members of Marriott Bonvoy’s award-winning travel program to use their points to access incredible experiences at Super Bowl LVI in Los Angeles – something no other travel program can offer.

The Marriott Bonvoy Moments platform gives members the chance to use Marriott Bonvoy points earned from travel and everyday activities such as hotel stays at Marriott’s 30 extraordinary hotel brands, cobrand credit card purchases, ride-sharing, or food delivery, to gain VIP access to bucket list experiences all over the globe. Members may redeem their points for either fixed-price experiences or use them to bid on packages through auctions.

Starting today, the Marriott Bonvoy Moments platform will offer multiple exclusive Super Bowl LVI experiences that will give members an unforgettable way to enjoy the biggest weekend in football. This includes the chance to meet NFL Legends, gain field access at Super Bowl LVI and attend Super Bowl LVI in style in the Courtyard by Marriott stadium suite. Two lucky winners will even get the VIP treatment at the iconic Pepsi Super Bowl LVI Halftime Show.

These Moments experiences are the culmination of a series of money-can’t-buy packages offered by Marriott Bonvoy Moments throughout this year’s football season, which has included everything from attending NFL Draft, to learning how to “make the call” on plays with the NFL’s VP of Officiating, Training and Education.

“Our members are passionate football fans excited take their passion for the game back on the road this NFL season and for the return of in-person football experiences,” said David Flueck, Senior Vice President, Marriott Bonvoy. “We’re thrilled to be able to offer these once-in-a-lifetime Marriott Bonvoy Moments at the Super Bowl once again through our longtime partnership with the NFL, giving our members the chance to use their points to make unforgettable memories with friends, family, and new connections.”

Marriott Bonvoy has been offering members exclusive access to the NFL’s most coveted events since 2016. To date, football fanatics have redeemed more than 94M points to pursue their passion for football with exclusive access to luxury suite seats, hands-on master classes, meet and greets and more.

To bid on one of the Super Bowl LVI experiences, or to find out what else Marriott Bonvoy Moments has to offer, visit https://moments.marriottbonvoy.com/

Hotel and airline loyalty program points and miles have the best value when used respective flights and stays.

There are occasionally good value opportunities to bid on various experiences that are not otherwise widely available for the general public. These can make sense for program members that earn more points than they can ever use. Better to turn them into something useful than allow them to expire or devalue through the years.

A reader dropped us a note that there is no availability on Marriott's website for Ritz-Carlton Cancun past August 31,...