Cathay Pacific found itself in the middle of a Covid scare this month after three cargo pilots returning from Germany were found infected with the Coronavirus, causing almost 300 citizens and Cathay employees to be forced into 21+ quarantine by Hong Kong authorities. 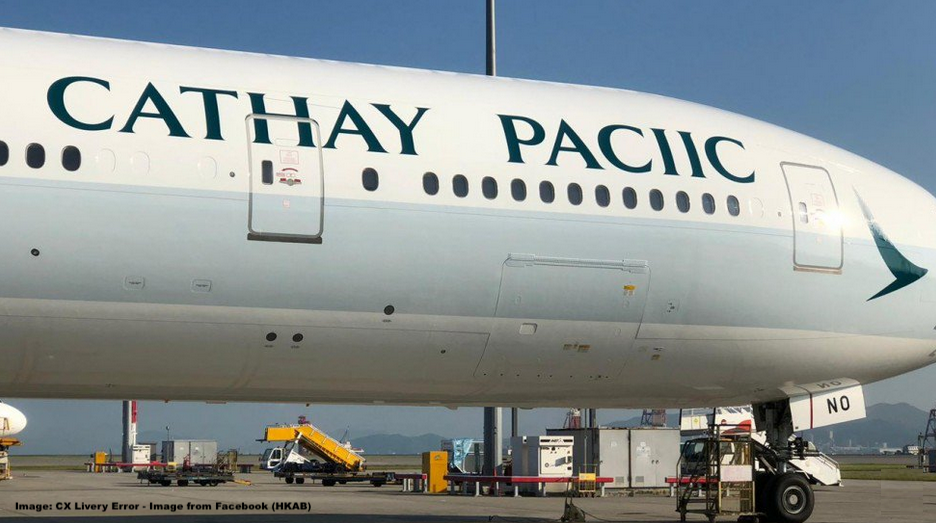 An investigation has now concluded that the pilots have breached company protocol while being on their layover in Germany and given the severe consequences of these cases their employment has been terminated.

Breach of protocol could be anything reaching from leaving the hotel room to meeting up and congregating with other individuals. The carrier has not elaborated on what exactly the crew has been accused of that ultimately lead to the termination of their employment.

Meanwhile, the Hyatt Regency Mainz where the crew stays when flying to Frankfurt has become a focal point of the investigation. Whatever information they provided to Cathay Pacific might have provided sufficient basis for the airline to solidify their case. Keep in mind Germany is also seeing a record surge of Cov19 cases this month with some days now reporting upward of 60,000 new cases.

The affected Cathay Pacific staff which numbers roughly 200 people is currently being held for three weeks at a container camp in Hong Kong which is a rather scary picture judging by media reports about this site.

South China Morning Post first reported about this six days ago when the cases appeared.

Cathay Pacific will move its aircrew to a different hotel in Frankfurt and tighten other measures after a cargo pilot arriving in Hong Kong from the German city tested preliminary-positive for Covid-19, triggering a lockdown at his residential estate.

The 53-year-old aircrew member was found to be carrying the L452R mutant strain linked to the more infectious Delta variant after returning to Hong Kong on November 7, the Centre for Health Protection revealed on Saturday.

Cargo pilots are exempt from hotel quarantine, but after two other Cathay ones tested positive with the Delta variant earlier this week, fears are growing that the special treatment could spark new community cases and derail the city’s efforts to match mainland China’s zero-Covid approach and fully reopen the border. [The border to China that is.]

Authorities on Friday said it would be mandatory for all local aircrew to receive Covid-19 booster shots, while requiring those who operated cargo flights to be tested daily and placed under stricter monitoring at outports. …

“As a precautionary measure, we have immediately arranged another hotel for aircrew staying in Frankfurt and will suspend layovers at Frankfurt for our cargo aircrew as soon as practicable,” Cathay Pacific said.

“As an immediate action, we will step up our compliance checks at overseas stations to ensure Cathay Pacific’s health and safety protocols are being strictly followed by aircrew during their layovers.”

The cargo crew members stayed at the Hyatt Regency Mainz, according to sources.

Authorities on Wednesday revealed that the two other Cathay cargo pilots tested positive for Covid-19 upon their return from Frankfurt last Saturday and were staying at home in Tsim Sha Tsui and Discovery Bay, respectively.

Officials put their household members and close contacts under quarantine. They included 120 students at Discovery Bay International School, where the wife of one of the pilots teaches and their two sons attend, and 13 other close contacts of the Cathay worker. Sixty friends and colleagues of the other pilot were also quarantined.

This “zero Covid” policy that originates from mainland China is absolutely insane and totally impractical, seeing how it terrorizes the entire population. Three pilots testing positive resulting in several hundred individuals including 120 school children being thrown into a quarantine container camp is just nuts.

This is the camp in question:

After several days of investigating this case, Cathay Pacific has now decided to pin the blame for this incident on three pilots who have now been fired.

Cathay Pacific has fired three cargo pilots who were infected with Covid-19 in Frankfurt after an internal investigation by the Hong Kong carrier found the trio were involved in an unspecified “serious breach” of crew requirements while overseas.

In a statement on Thursday afternoon, Hong Kong’s flagship airline did not reveal the breach but said the individuals concerned were “no longer employed” by it. However, a company source said the trio were suspected of leaving their hotel rooms in Germany.

“After investigation into these cases, regrettably, the findings indicate a serious breach of requirements during crew overseas layovers,” the statement said.

In response to the findings and considering the “severity of the incident”, the government said it had told Cathay to ensure there was no recurrence of such events.

“The [Transport and Housing Bureau] is deeply regretful of and can hardly accept the concerned cargo crew’s non-compliance,” it said, while noting they were individual cases.

The three infections among the quarantine-exempt cargo pilots caused more than 150 Cathay staff to be quarantined. Many more close contacts were sent to a government isolation facility at Penny’s Bay.

More than 120 pupils at Discovery Bay International School, where the wife of one pilot teaches and two sons attend, were also quarantined. About 70 friends and colleagues of the first two pilots infected were put in isolation. …

Two of the pilots, aged 29 and 57, were confirmed infected on November 10. They had claimed during an epidemiological investigation by health authorities that they did not leave their rooms during their stay in the German hotel and did not participate in any gatherings.

The third pilot, 53, had stayed in the same hotel and was confirmed infected on Sunday.

In the wake of the infections, Cathay and the government reviewed the protocol for exempted pilots, tightening supervision at home over the first seven days of their return from a trip.

The airline was at risk of losing its exemption privileges, further jeopardising its flight operations which are already struggling under the city’s tough Covid-19 quarantine policies.

Pilots who are exempt or do not leave the plane at their destination must not leave home except under exceptional circumstances, and have to take daily Covid-19 tests. …

The airline on Wednesday said 104 flight crew, 46 cabin crew, one safety training employee and two ground workers were in the government’s quarantine facility at Penny’s Bay. And a “large number” of employees’ household members and community contacts had also been quarantined, it added.

Government pandemic adviser Professor David Hui Sui-cheong said airlines should be compliant with the rules while staying overseas and in the Asian financial hub to minimise the risk of importing cases to Hong Kong.

“This is the only way to ensure the airline industry can continue to function while HK is adopting zero-Covid policy,” Hui said.

Here we go again. The notion that a serious academic suggests it’s possible to maintain zero Covid in a city like Hong Kong is laughable. One can take from the article a week ago that the CCP in Beijing is pressing for the land border to reopen but they’re obviously scared to do so. China has repeatedly locked down entire cities with millions of people over Covid scares hence I can’t see this insanity in Hong Kong subside anytime soon.

Here is an Instagram account of one affected Cathay Pacific pilot who is now locked up after returning from Germany, now determined to be a “close case”. She also took a video of her cell. 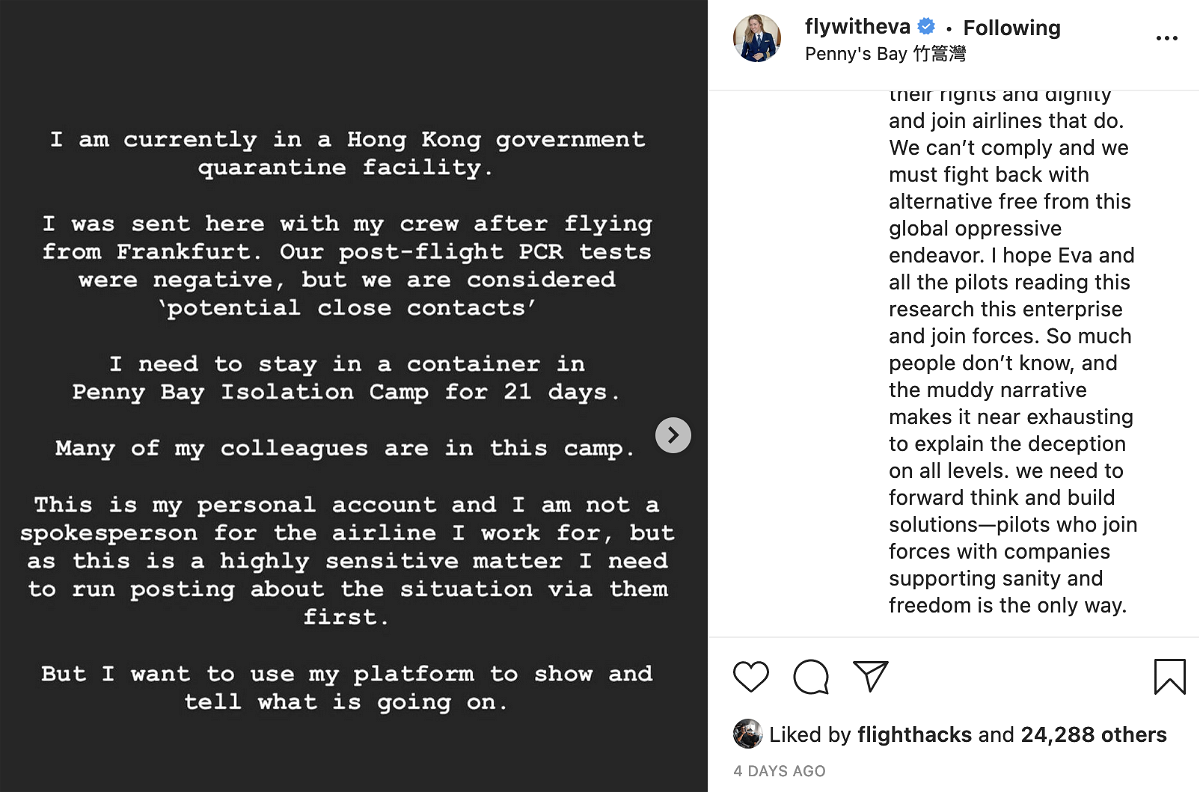 It’s hard to believe that there can be any watertight “investigation” unless one of the pilots confessed they did something that violated company protocol or the hotel provided conclusive evidence such as a video of the crew members leaving the room and the hotel. I can’t imagine such footage being turned over willy nilly based on data protection laws in Germany.

This firing sounds like a political decision to me, designed to appease the HK government and their Chinese overlords. Nevertheless, it’s undisputed that the rules are in place and the crew is aware of them. I can’t imagine how it is to work under such conditions and as I said in the past I’d rather resign and find employment at another airline than be subjected to the oppressive regulations in Hong Kong. Especially for pilots, it should be easy enough to find another employer. Both Hong Kong and Cathay Pacific used to be great but these times are obviously over.

Cathay Pacific has now fired three pilots they pin the blame of the lastest HK Covid scare on, following the government interning close to 300 people including 120 school children. No evidence has been provided publicly that the pilots have done anything wrong that could be deemed an excessive risk. Personally, I don’t trust this “investigation” the carrier conducted as it sounds more like a witch hunt for them to shed responsibility.

The airline is expecting the crew to conduct flights in a professional manner, face passengers, and in the case of the cargo crew airport workers but then accept being prisoners aside from conducting their duties. This is a totally unacceptable attitude. Crew can get infected anywhere along the way as they face countless people. The airline knowingly and willingly lets their crew circle the world and touch down in current Covid hotspots such as Germany. Well… play the game, take the blame. The crews are employees, not property.