A graphic posted online by Airports Of Thailand (AOT) outlining that passengers are not allowed to carry more than 30 face masks out of the country or possibly face stiff fines has been “clarified” by the authorities. 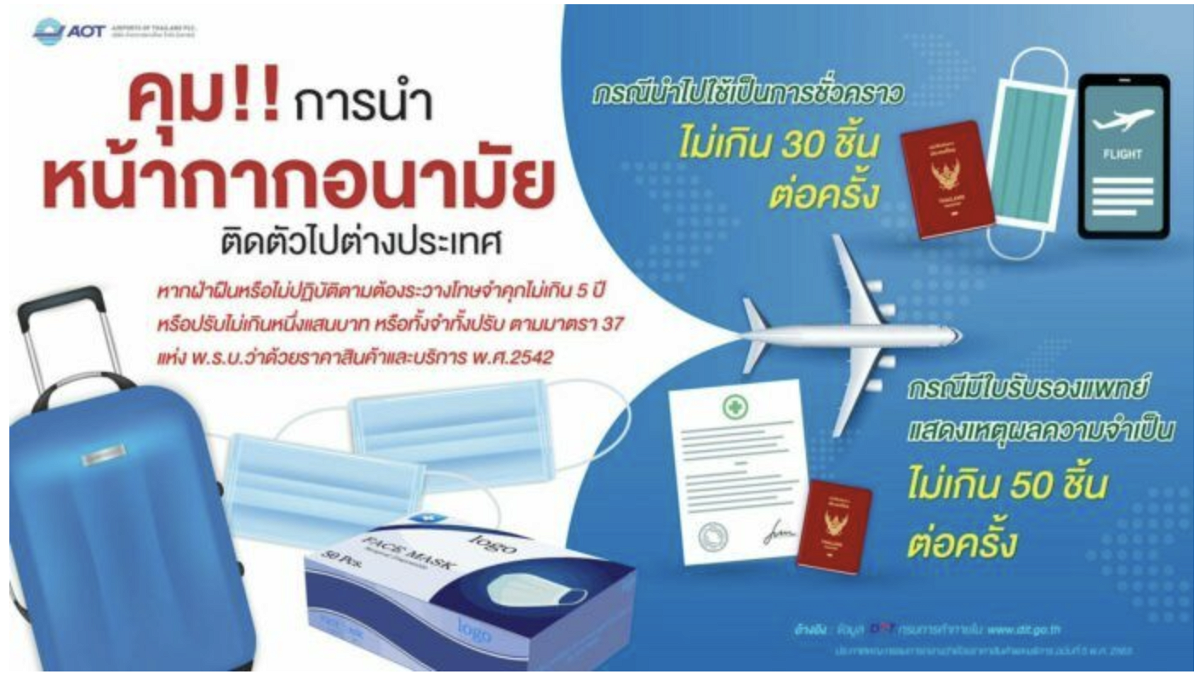 According to the regulation, anyone who violates the restriction will face up to 5 years in jail or incur a fine of up to 100,000 baht (or both).

The landing page where this was posted has since been taken down after it caused an uproar in Thai social media and received plenty of attention in the country.

It’s unclear when this was first posted but I remember that this was indeed a thing in the early days of the pandemic when face masks were scarce in Thailand and you were only allowed to buy a small amount at the stores as well.

The controversy has forced the director of Suvarnabhumi airport to come out and clarify that the news about the 30 mask limit (50 with a medical certificate) when leaving the country is a misunderstanding. 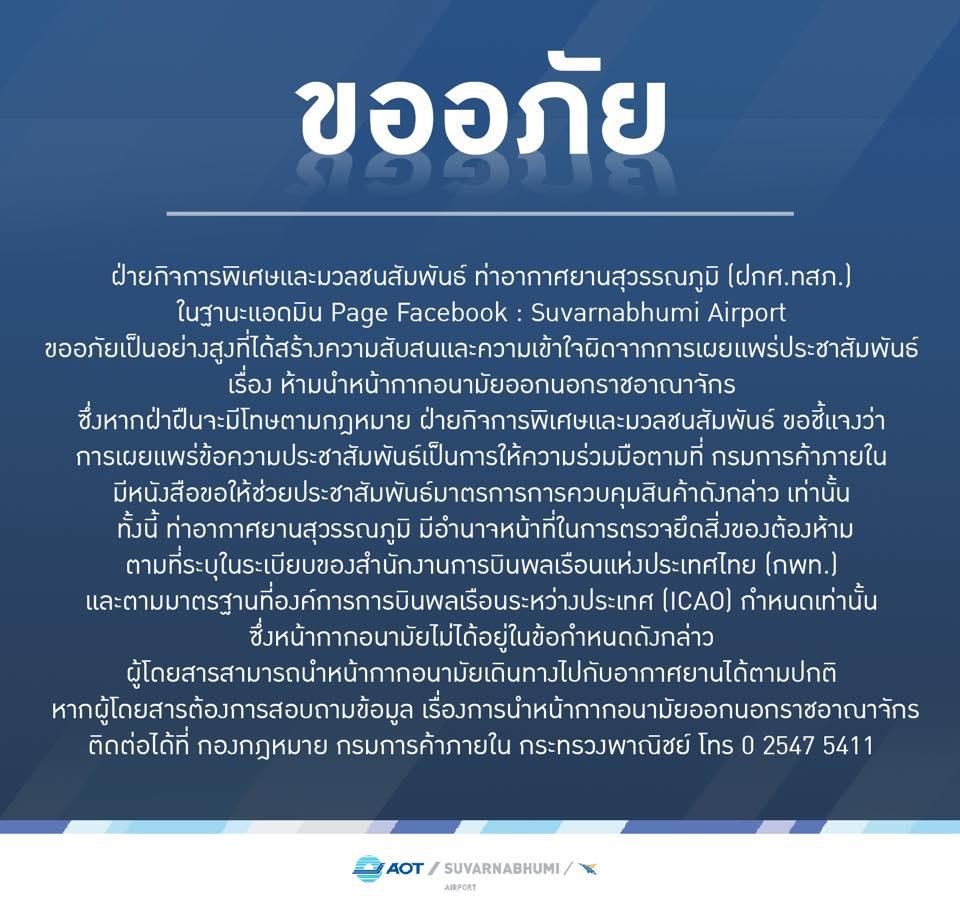 The AOT director states (in the official documents – all in Thai) that the regulation as previously visible on the AOT website was a “misunderstanding” and referred to an outdated regulation that dates back to the early days of the pandemic when this restriction was indeed in place. Since there is no mask shortage anymore this is no longer enforced.

It doesn’t say (as some comments replied) that the rule is officially rescinded. That being said I also never once heard it being enforced for the entire two years so this is probably another one of these rules that exist on paper but that are never enforced.

Another press release was posted this morning: 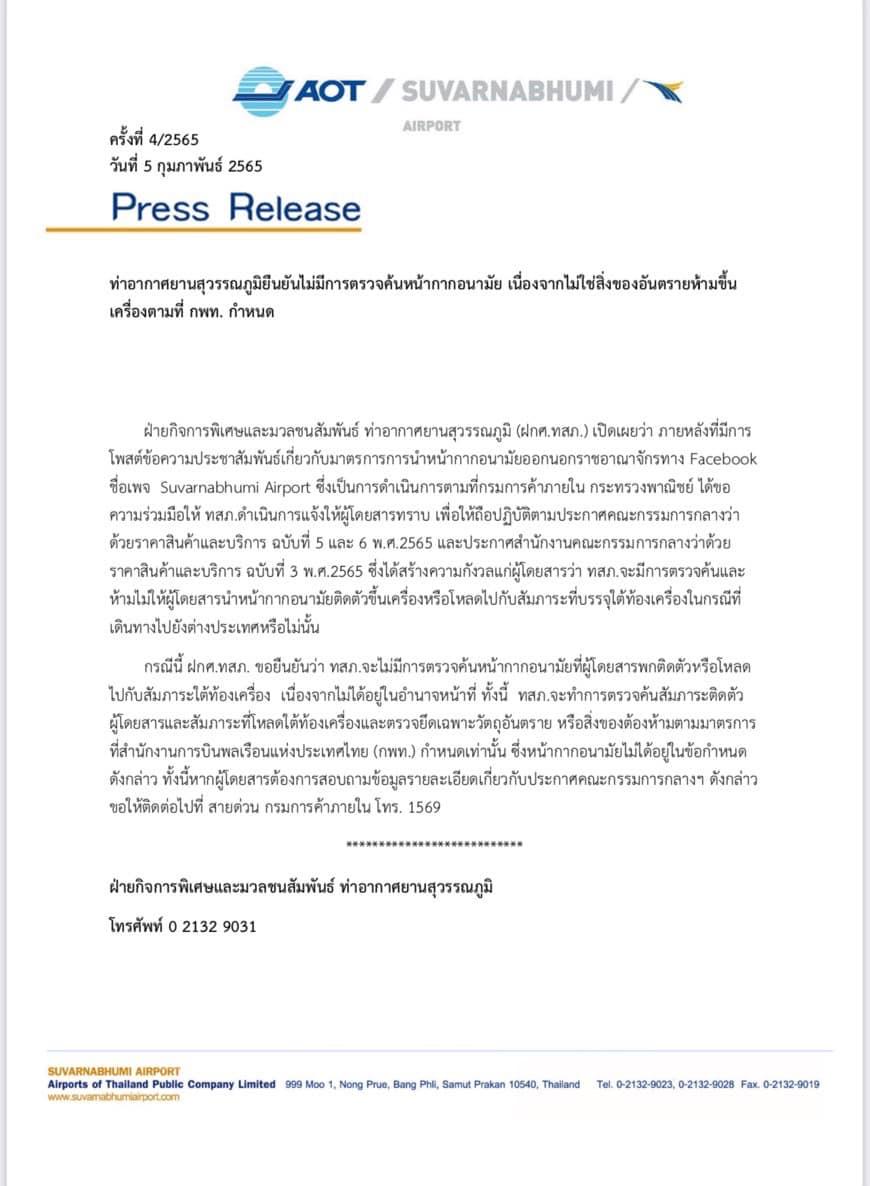 The short translation of this is:

Suvarnabhumi Airport confirmes that there is no inspection of sanitary masks as it is not a dangerous item with which boarding is prohibited according to the Police Department. If passengers want to inquire about the announcement of the Central Board, please contact the Express Line, Department of Internal Commerce, at 1569.

This is another situation where completely unnecessary rules paired with outdated information create a firestorm.

It wouldn’t even have been an issue had the relevant authorities (AOT) taken down the post as soon as mask shortage was no longer an issue but then again it’s totally unclear if this regulation has actually been revoked or if it just isn’t enforced like many laws on the books.

Airports of Thailand had an active post on their website threatening a heavy fine and even prison time should people take more than 30 masks out of the country when departing Thailand.

The information was never updated or removed since the original posting and it drew attention sometime this week after which it went viral in Thai media. The AOT directors came out to clarify, calling it a misunderstanding. Well, Thailand has earned a reputation for being the world’s epicenter for “misunderstandings” as far as regulations, policy, and miscommunication is concerned.

While one can argue about how much or little sense it makes to have something like this written into law, it’s is certain that nobody should worry or even care about this rule. It’s not being enforced currently and I’ve not read about a single case where this has been enforced in the past. You can guarantee that if there was such a case where people were hassled, fined or prosecuted it would have gone around like wildfire in the media.