I’m always surprised that in this day and age with technology and all there are still attempts to smuggle vast amounts of drugs across international borders by airplane as it was just discovered in Bangkok on Monday. 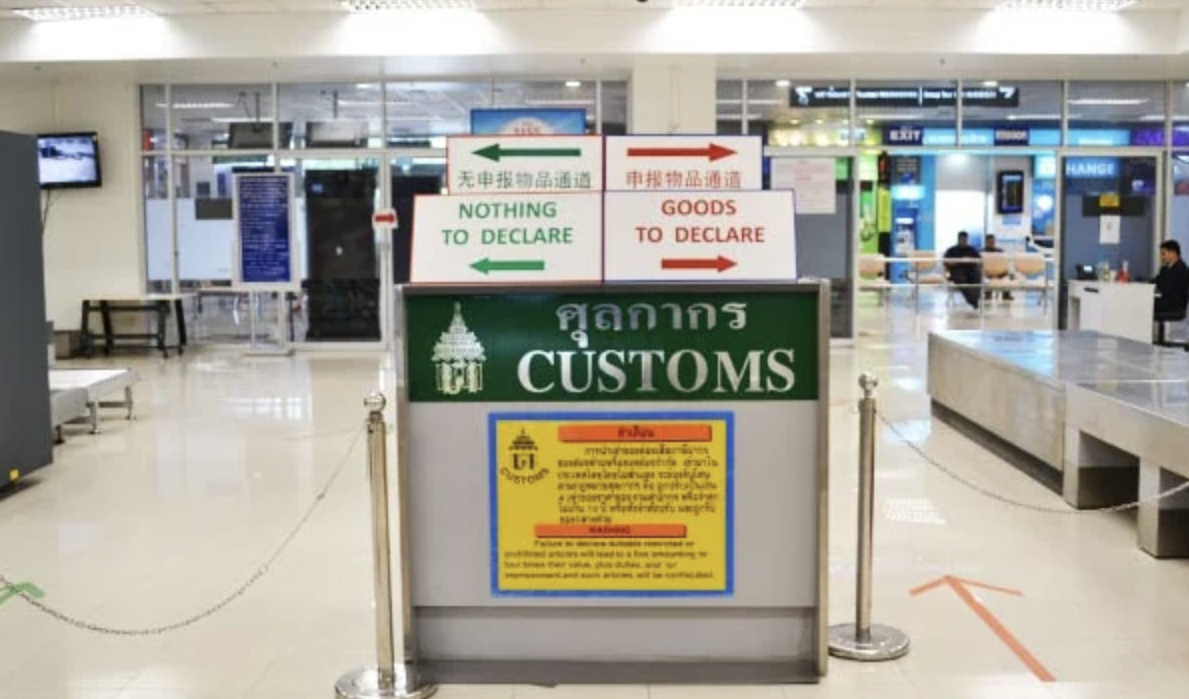 Three Brazilian nationals have been arrested on Monday after arriving at Suvarnabhumi airport with 15.5 kilograms of cocaine hidden in their baggage, maybe someone should have told them the way to enter the Kingdom is called Test&Go, not Test&Blow.

For the smugglers (mostly poor people from developing countries) the profit margin is rather slim compared to the total value of the delivery but of course, the risk is all theirs especially in countries such as Thailand where the death penalty is on the table depending on the type of narcotics and once a certain quantity threshold has been passed.

As the Bangkok Post reported in this case there were three individuals involved and the quantity was 15.5 KG of cocaine.

Three Brazilians have been arrested on arriving at Suvarnabhumi airport and 15.5 kilogrammes of cocaine, worth about 46.5 million baht, seized from their luggage.

The suspects, two men and one woman, had arrived from Brazil on two flights on Monday.

An X-ray showed suspicious items in compartments of their three bags. A closer examination found nine kilogrammes of cocaine in the concealed sections. It was wrapped in black plastic and had a street value of about 27 million baht.

Later on Monday, a 24-year-old Brazilian man was arrested after 6.5 kilogrammes of cocaine, worth about 19.5 million baht, were found hidden in his two bags. The suspect had travelled from Brazil on flight QR836, arriving about 12.40pm.

The three suspects and the seized drugs were detained pending further legal action.

Flying with drugs through the Middle East to Thailand – just wow! Somebody really likes the risk. That being said, these people are most often from poor backgrounds and not very literate. Certainly not well versed in regard to the laws applicable in the countries they go to. The mules are being told to carry whatever package and someone will contact them at the destination to pick it up. Either they don’t care anyway or they’re being told lies by the cartels such as the penalties if caught are very low in whatever country. This might be the case in Europe but in South East Asia… not so much!

It’s incredible that people still risk it with all technology in place. I could very well imagine this has already been detected in Qatar and that authorities there have tipped off their Thai counterparts. A very common and popular way to handle this by transit countries as this way Qatar doesn’t have to deal with the criminals in their own courts/prisons. After all, I’m going through Thai customs for 10+ years now and my bags have never been searched. Doesn’t mean anything though. Customs officers aren’t stupid and they usually know their clientele quite well based on observing their behavior and the intelligence provided behind the scenes. 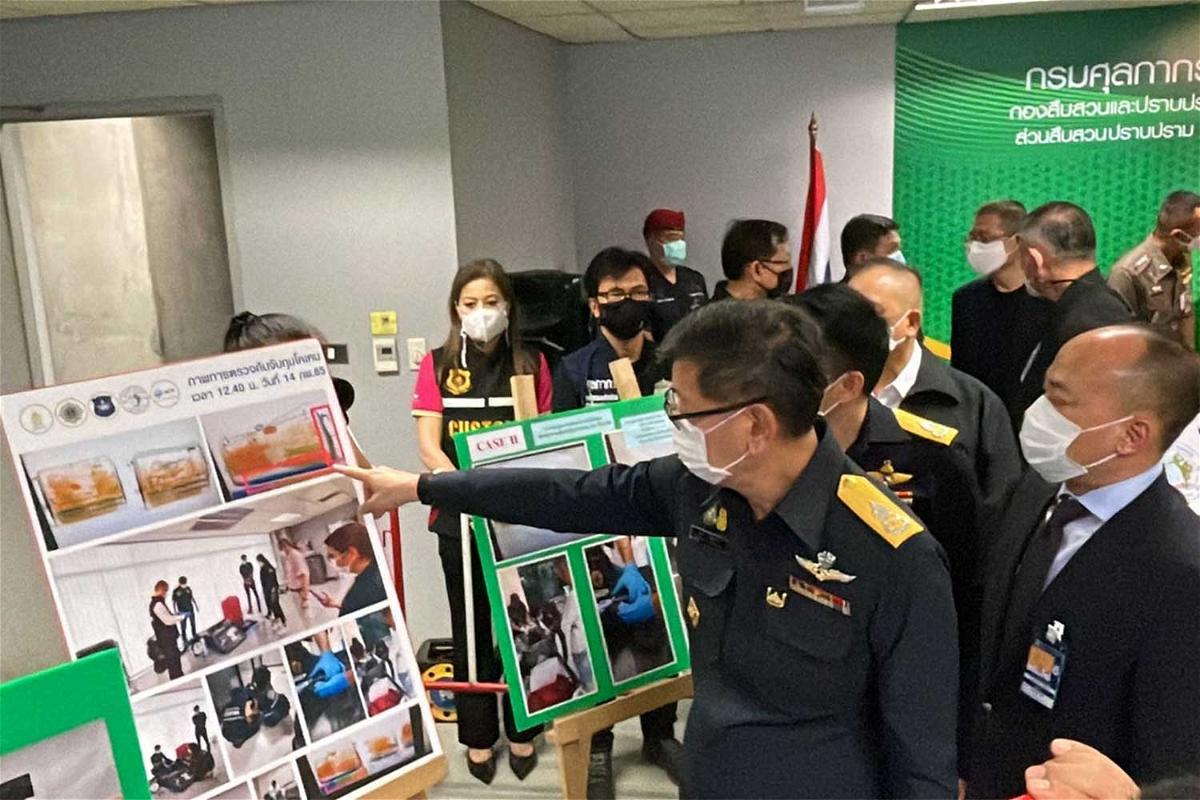 These three won’t be dealt with too kindly, that’s for sure. 15.5KG is a rather large amount. Cocaine is a Schedule 2 narcotic in Thailand together with substances such as Morphine and Ketamine. In terms of punishment, it weighs less heavily than Schedule 1 substances such as Heroin, Amphetamines (ecstasy), Methamphetamines.

The penalties are still considerable though. In 2017 the drug-related laws in Thailand were overhauled and while the previous penalty under Article 65 (1) (Import & Export) was a mandatory life sentence, the new law gives the courts leeway stipulating 10 years to life (+ financial penalty) depending on the case. The more serious penalties are under Article 65 (2) (Sale of drugs) where the death penalty is still possible but had changed from the previously mandatory sentence of death to Life imprisonment and a fine of 1 million baht – 5 million baht, or death penalty.

It’s always quite arbitrary what the prosecution and courts will apply depending on how the case is constructed and how cooperative the accused are. The import can’t be disputed when caught at the airport. There hasn’t been a sale yet although it’s undoubtedly implied by the nature of the offense. Penalties for drug cases in Thailand depend on lots of things including legal representation, the ability to pay fines (+ bribes), and admit guilt. Accused who are unable to get assistance from their embassies and destitute are hit harder. The most severe punishments are given for Schedule 1 narcotics offenses though.

Usually, the death penalty is not given in drug cases when the accused (especially foreigners) plead guilty and instead receive a life- or in the very least a very lengthy sentence. In some cases, the convicts are pardoned by royal decree many years (decades) down the line or can – after serving half their sentence – apply to serve out the remainder in their home country if such an agreement exists between Thailand and the convicts home country.

Three Brazilian nationals have been caught at Bangkok Airport on Monday smuggling a combined 15.5 KG of cocaine into Thailand when arriving via Doha on Qatar Airways.

This was one of the more prominent drug cases at the airport in recent years, mostly because of the slow travel activity since the beginning of the pandemic. Thailand has a large prison population convicted of drug offenses, “housed” in the infamous Bangkok Hilton which is the cozy nickname of Bang Kwang Central Prison.

A friend of mine works at the U.S. Citizens Unit at the Embassy in Bangkok and is regularly visiting American prisoners there. Pretty grim experience judging from his stories. Western embassies usually deliver vitamins and other health supplements for the inmates under their care to try and keep them in reasonably good health. Some European countries such as Germany also allow citizens to apply for social assistance payments from prison in order to purchase certain goods. These payments will be dispersed by embassy officials to a prisoner account at the institution. There are plenty of documentaries about life in Bang Kwang, a horrible place to live (waste away) for several decades or even years. Lesson: Stay away from drugs, especially in South East Asia!

Malaysia’s Reopening For Tourism In March Put On Hold

Airfare of the Day [Business Class] SKYTEAM Dublin to San Francisco from 1,335€