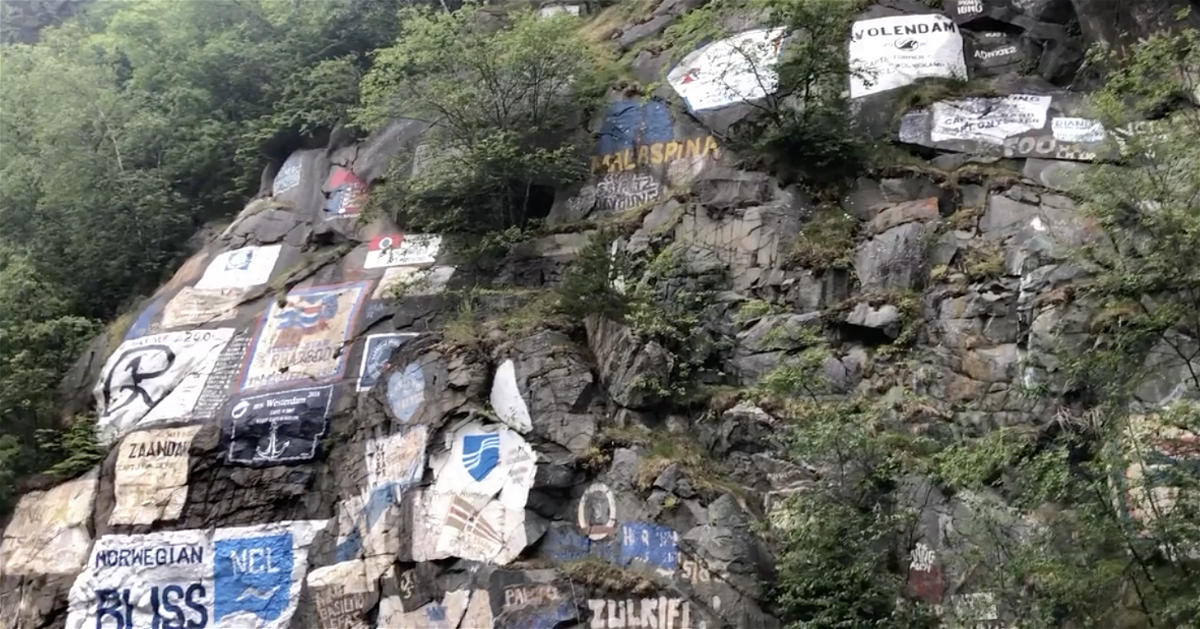 The cruise ship dock in Skagway is actually owned by the White Pass Yukon Railroad, and some docking positions are very close to the mountain, which puts ships and people in danger as a new study shows.

Skagway’s port can hold a total of four cruise ships on three different docks and the Railroad Dock which is located very close to the mountain and is now cause for concern.

To get a better impression, here is a map of Skagway that city planners published in 2020: 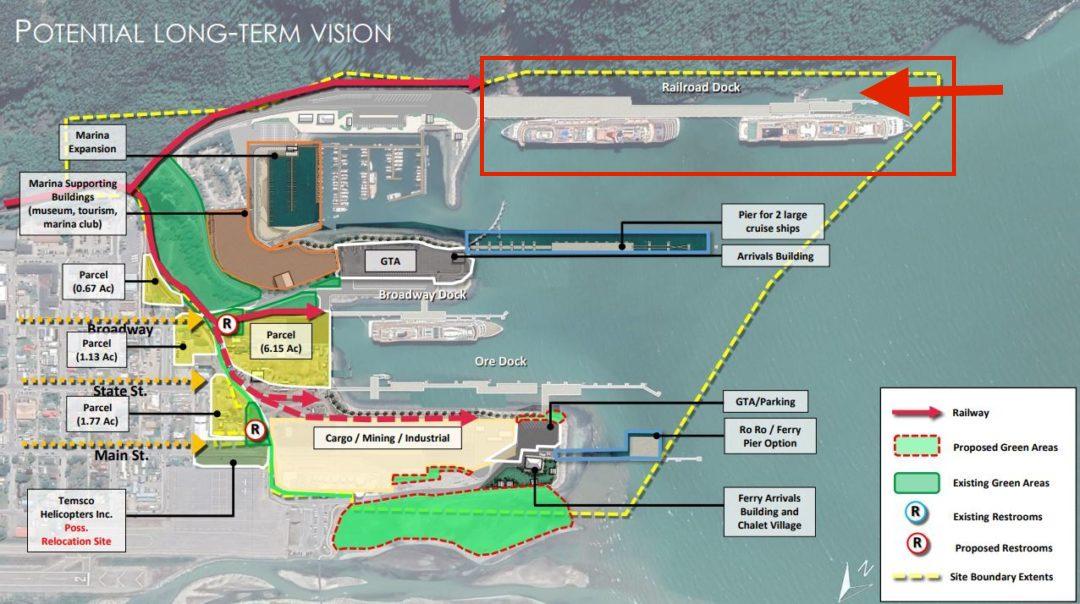 The two ships that are usually docked on the Railroad Dock (quite a walk from downtown) are pretty much face to face with the cliff, and it has become a tradition for ships to paint graffiti on the wall to mark special occasions such as our return to cruising in July 2021: 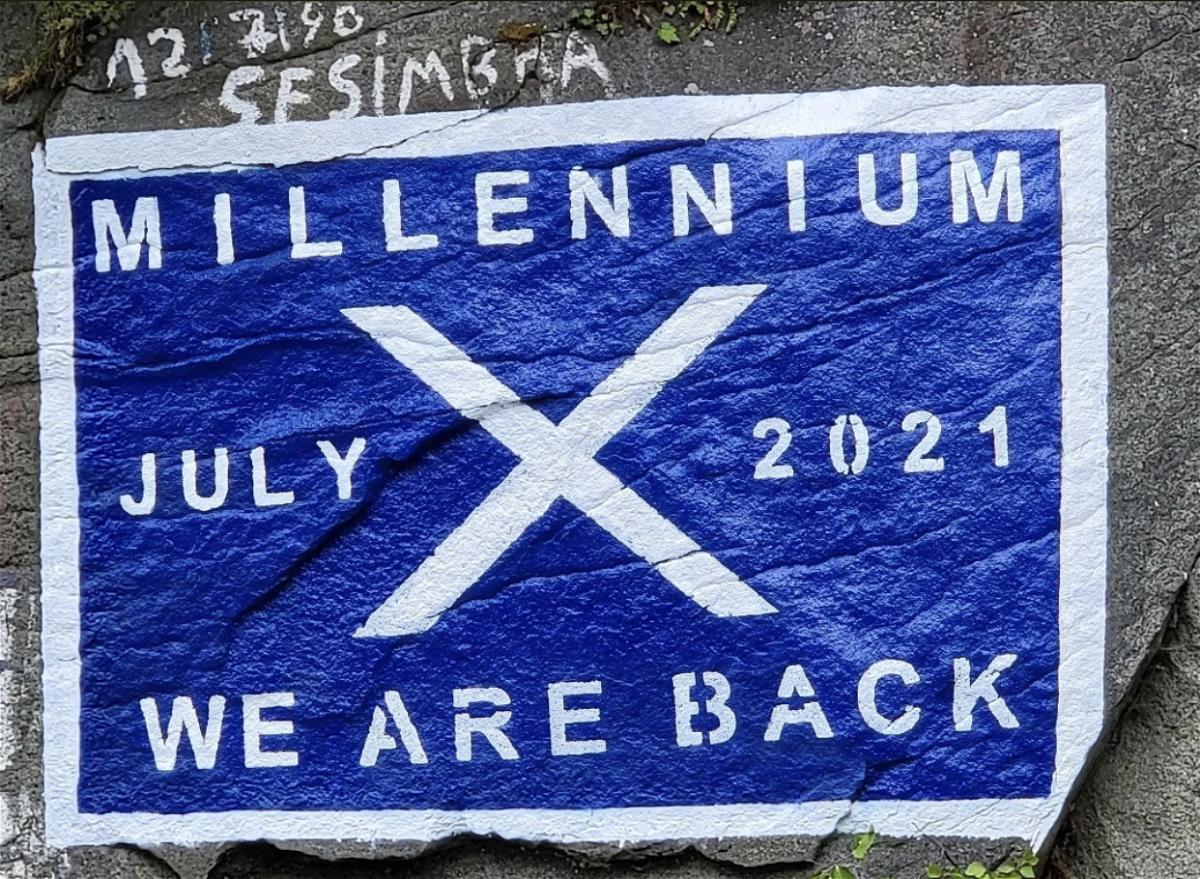 This was until this week when a study came out, highlighting how unstable the ridge is and that a catastrophic rockslide (which has happened as recently as June) is posing substantial danger to the cruise ships and people staying in the immediate area, alongside the entire dock.

Skagway has consulted Geotechnical firm Shannon&Wilson to conduct a study and this is their full report.

Alaska Public reports that authorities, city management, and cruise lines are currently on alert to try to find a solution to this problem.

Of one slide area, the report warns of “significant risk associated with complete failure” with catastrophic results, including “risks to life and property.” The study’s authors go on to say that the slope’s movement is speeding up, suggesting that “the failure event is approaching.”

At its latest meeting, the borough assembly asked the dock’s owners, White Pass and Yukon Route Railroad, to stop using the portion of the dock in the active slide area. But the next day, municipal officials agreed to instead rearrange passenger foot traffic to try to reduce the risk.

Mike Swasey: I work down there four or five days a week. And I look up at that giant rock that’s perched and has been moving at a couple of inches a year now ready to come down at any time. And I think, what’s my best escape route? That’s what I think when I’m down there. It’s incredibly frightening.

Reba Hylton: Absolutely. And when they first started monitoring this, you know, it was moving at the tune of one and one-and-a-half inches a year. And now this new report released said it’s moving to two-and-a-half inches per year. So historically, we don’t have more data than a few years old, unfortunately. But I mean, you hear those facts, and it’s pretty frightening.

Mike Swasey: Now White Pass is claiming that the rocks that could cause damage on the railroad dock are coming from municipal land. So they’re municipal property. How did the assembly respond to that?

Reba Hylton: Whew, man, it was hard. It was a four-hour meeting. This was the hot topic. Basically, everyone is liable. We all know what’s going on down there, and we are putting not only ourselves at risk, but we’re putting all of our guests that come into this port that are docked on that side in risk. And it’s unacceptable. …

Mike Swasey: And what are the changes going to look like?

Reba Hylton: The security area where people get back onto the ship will be moved further south. The whole area where the coffee shop is and where the shore excursion booths are, that will be moved — not the caboose itself, I believe the caboose will be closed down. M&M (tour sales) will be closed down. That circular turnaround will not be available to anyone but SMARTbus, but even SMARTbus will be loading further north — just north of the restrooms down there.

Mike Swasey: And when do these new developments go into effect?

What is very interesting by the way is that the dock itself is in fact owned by a cruise line – Carnival Cruises bought the entire White Pass & Yukon Railroad including the dock, several years ago for $290M. I can see why they don’t want to shut down the dock as of right now as it impacts business. There is a liability question, though in case something does go wrong. If it does, it won’t be pretty.

How will this impact actual cruises?

As reported by CruiseRadio, Princess Cruises was the first line to announce itinerary changes this week. The Majestic Princess is going to Icy Strait Point rather than Skagway, which might annoy quite a lot of cruisers, especially those with pre-arranged excursions.

“The July 26 call of Majestic Princess will instead call on Icy Strait Point, but Crown Princess will continue with its scheduled call in Skagway Tuesday, as it docks at a different Skagway pier. This development also will affect the July 27 call of Royal Princess, the July 28 visit of Discovery Princess and the July 30 visit of Grand Princess, the specifics of which are still being coordinated.”

Princess is currently working on revising other itineraries as well while monitoring the situation in Skagway. Other cruise lines have not yet published any changes to their itineraries.

I’d have expected Celebrity to also react as they have always used the railroad dock whenever I was in Skagway with them (as recently as May this year). So far, it’s been crickets from Celebrity. 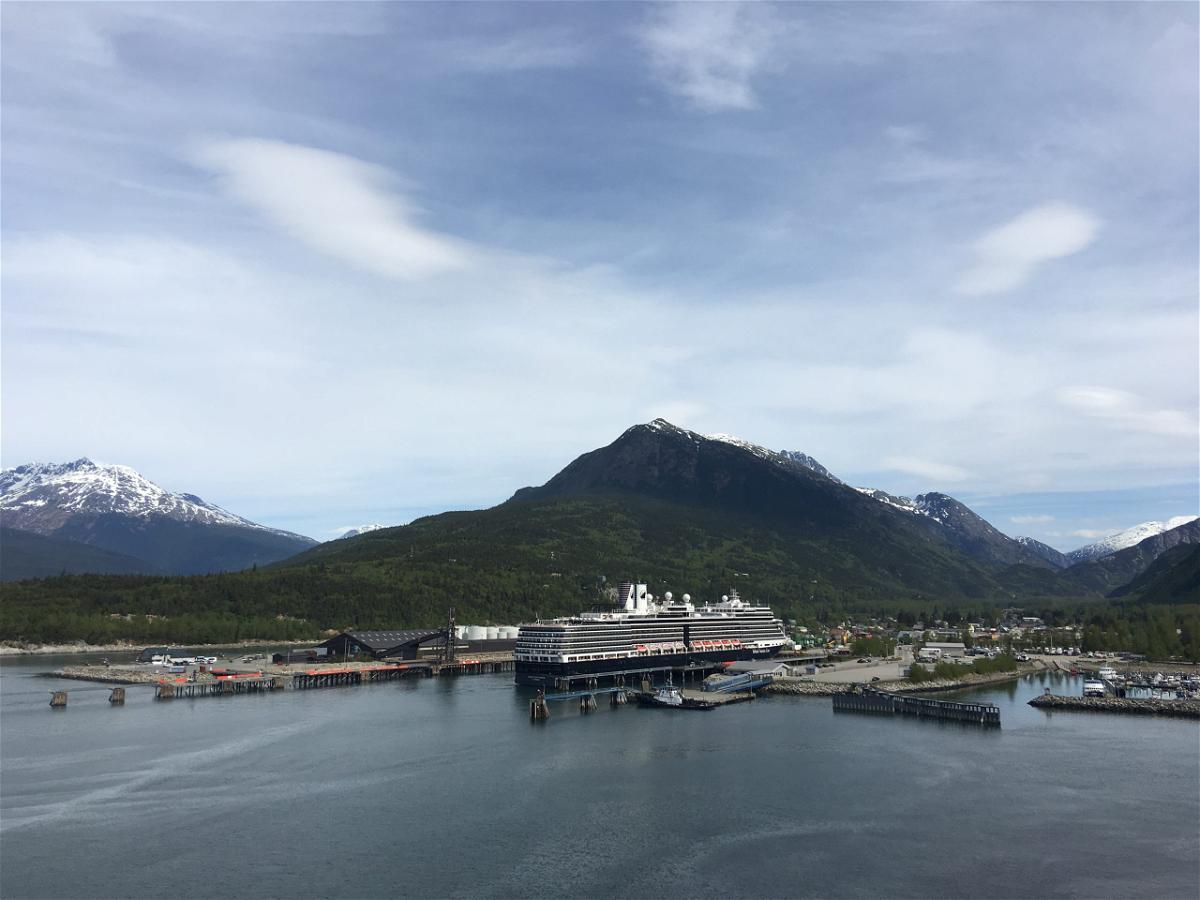 Keep in mind that we’re pretty much a bit more than halfway through the Alaska Cruise season at this point which runs from mid/late April to late September.

The geological report says that it’s an urgent situation, and even back in June there have been rockslides already, although no vessel or person was hit by it.

From the map and personal experience visiting that dock, I can’t see how Skagway or the dock owners could close the entire pier and redirect cruise ships unless it’s a slow day and the two docks close to the city would suffice. Tendering could be an option, but I’m not an expert, let alone a captain so I’m in no position to say if that’s a good call or not.

Skagway faces a major dilemma with its busiest cruise dock as the adjacent mountain is unstable and there have already been minor rock slides. Now geologists have issued a report that sounds an alarm concerning a much more serious incident that could happen at any moment.

The Municipality of Skagway and the dock owners (essentially Carnival Corporation) are currently at odds over the best way to proceed and if a closure if the best course of action. Even if they’d close it, then what? Essentially it’s the call of the cruise lines to make if they want to continue using the Railroad Dock under these conditions. Princess has already decided to cancel Skagway on some of their sailings so it’ll be interesting to see if other cruise lines will pull out too or at least request another dock / tender option.

Just like hotels and airlines, Cruise Lines have their very own loyalty programs as well and one that I've covered...