This week our Whine Wednesday is about hotels that don’t properly clean their minibar fridges, leaving opened beverages behind for the next guests (and possibly even charging for the opened drinks). 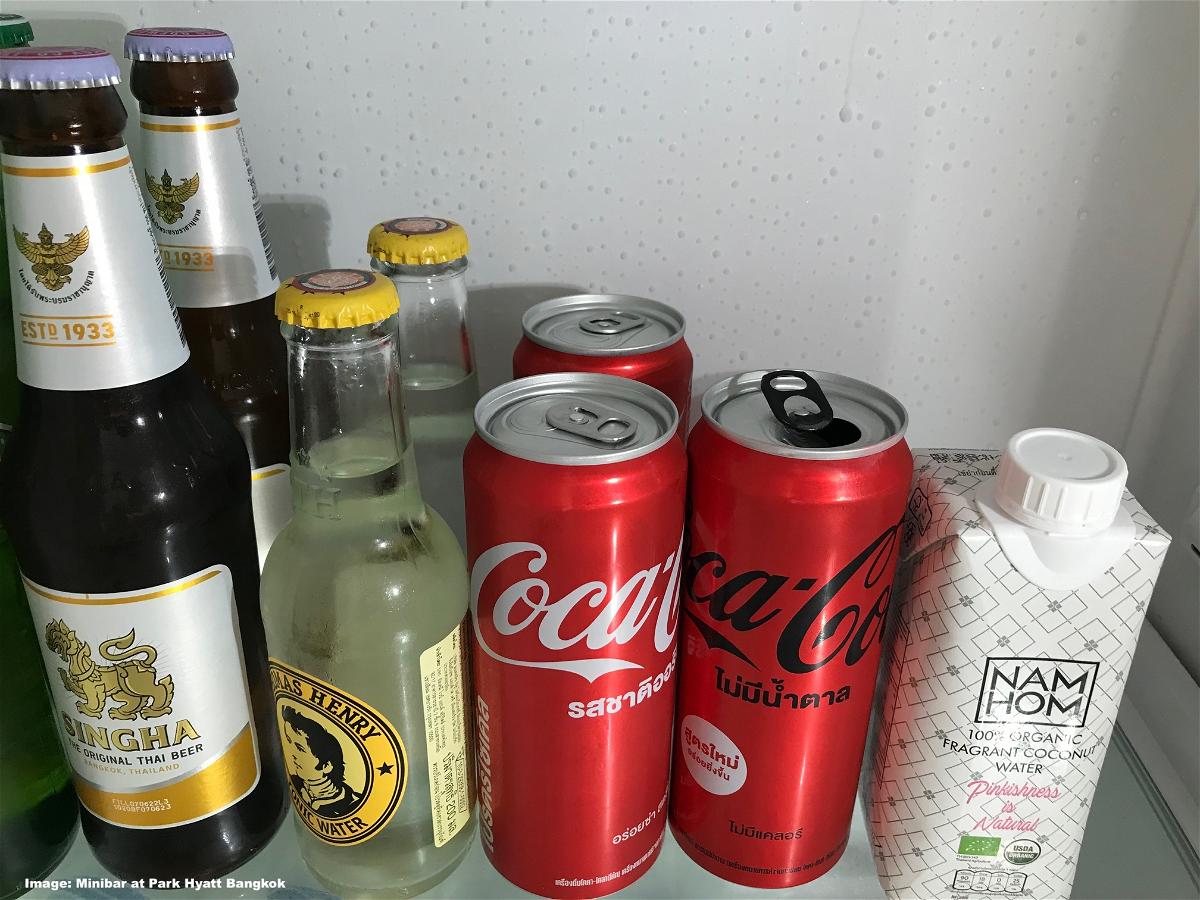 Many hotels have totally abandoned the concept of minibars as they are difficult to maintain and aren’t a big revenue center (in many cases, it actually costs the hotel money to offer minibars in the rooms).

As it was evident during my most recent stay at the Park Hyatt Bangkok, when a hotel doesn’t pay proper attention to the minibar fridges then it can also create quite a terrible impression for whoever stays after a guest who helped himself to the fridge and things weren’t replenished after.

Two weeks ago I stayed at the Park Hyatt Bangkok which currently charges 15,200 Baht++ per night (~US$500) or 20,000 points. I received one of their suites as Globalist upgrade and immediately after I entered the room I went to the fridge to cool some items I brought up from the supermarket at the Central Embassy Mall.

It didn’t take me three seconds to spot that the fridge hadn’t been cleaned since the last guest stayed there. The minibar items were partly open (coke zero can), assuming that one can was missing entirely from the fact that only one was left and there were crumbs in the fridge.

Considering they pride themselves so much on cleanliness and hygiene the hotel can’t even keep a fridge clean? I called up the front office manager and housekeeping director but even after looking in the fridge for a good minute they still didn’t see what was wrong with it.

After I pointed it out they simply took the empty can away and left. An hour later I asked the same lady who runs the Front Office if they were planning to clean and replenish the fridge. She then said they’d do it during turndown service at which point I sort of lost it.

After housekeeping was done with the fridge they left dirty cleaning utensils behind in the sink. You really can’t make this up!

Dealing with minibars has a couple of traps for hotels. For one, many guests are dishonest. Even at hotels that cost hundreds if not thousands per night people steal from the minibar and even go as far as concealing used beverages.

This means that housekeeping staff or a designated minibar attendant has to check every single minibar diligently day by day, especially before and immediately after a guest checks out. This is very time and staff intensive.

If there’s a used beverage in the fridge the guest would then be charged retroactively which often results in a dispute over a tiny amount which is rather uncomfortable to do for a hotel, especially a luxury one.

In my case, I made a point of informing the hotel immediately that the minibar hasn’t been cleaned and is missing items. I prefer not to be charged 300 Baht for Coke Zero which I don’t even drink and then later have to argue with the hotel about it. I was probably lucky that I noticed it right away.

Some properties have installed touch-sensitive mini bar fridges that constantly charge things to the guest account if items are being briefly moved. In short: They are a nightmare for the hotel, and most have completely stopped offering them, just leaving an empty fridge behind for the guest. Properties in the five-star luxury segment however don’t have that option as a mini bar is still part of a luxury hotel’s amenity portfolio, so there is very little they can do.

To make minibars even remotely worthwhile hotels have to price the items accordingly which leads to sometimes pretty insane prices and even exotic articles:

The Most Expensive Minibar Item Ever?

In the case of the Park Hyatt Bangkok, it would have been very simple to quickly clean the fridge and look at the items, but this wasn’t done. Even after notifying the hotel, they didn’t attend to it immediately.

Minibars are a contentious topic. I often use it when I arrive at night and there is no convenience store around the hotel. When I’m thirsty and there is nothing else around then I just have to bite the bullet and pay the price, even if it’s $5 for a soda, juice or sparkling water. I never drink alcohol from the mini bar.

In turn, the minimum I expect is that the fridge will be kept clean, fresh and that items are properly accounted for. A luxury hotel such as a Park Hyatt should be capable of doing that but unfortunately, they fell short this time.