Our Whine Wednesday today is about Thai Airways and their substandard catering, which has unfortunately gotten much worse over the years and has definitely reached a low point right now. 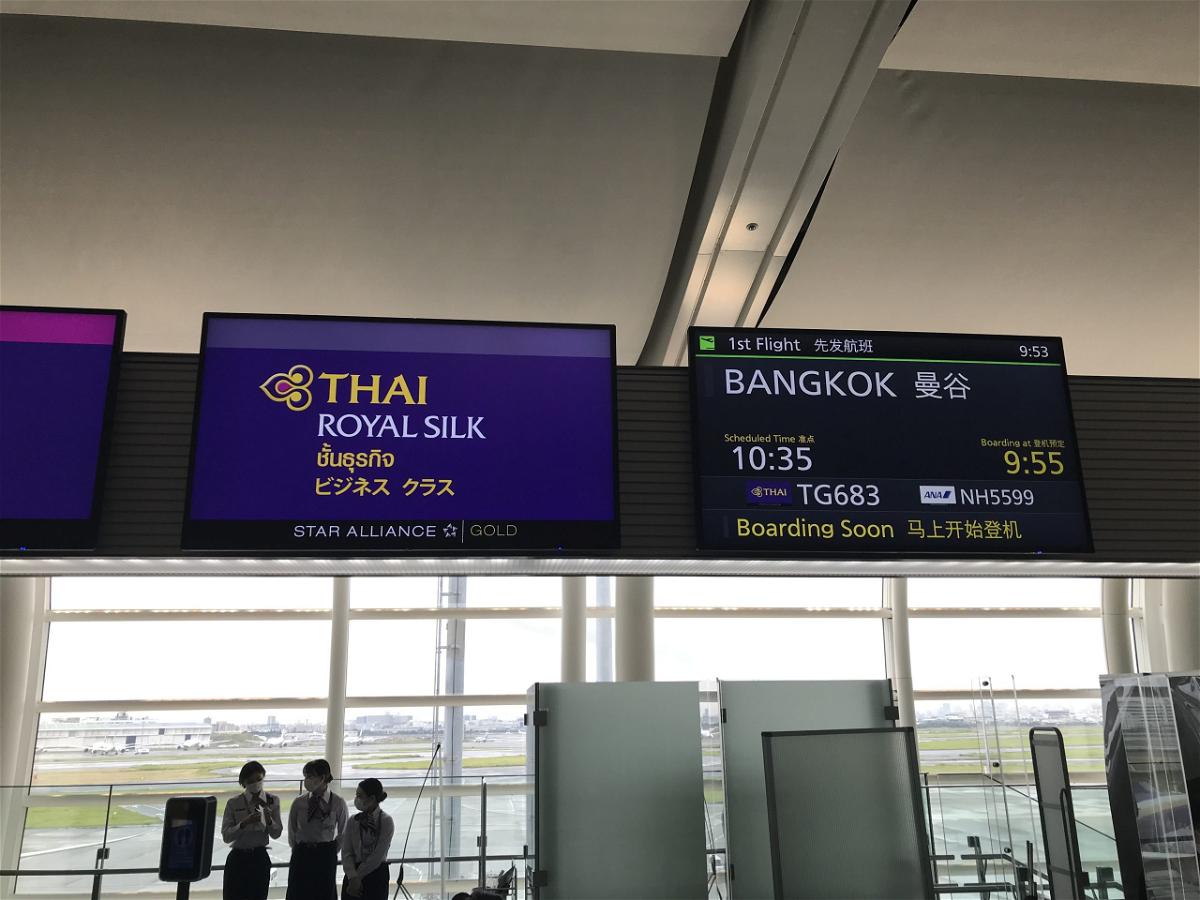 Catering was never really excellent in Thai Airways Royal Silk Business Class but their current financial predicament has really hit home, and the food is close to being unconsumable.

I have flown Thai Airways a lot in the last ten years, having spent a lot of time in Thailand and even more so during the past two years as I was interested how Thai Airways ongoing reorganization would impact the product and operations.

It was never a secret that THAI isn’t a premium carrier and when they cut First Class that pretty much cemented that notion even though First has made a comeback on the new Boeing 777 but even on those flights several seats are broken, inflight wifi doesn’t work and no menu is presented to passengers.

The same problems plagued pretty much all of the TG medium- and long-haul flights I have taken since the Fall of 2020.

My most recent experience was last Friday from Tokyo Haneda to Bangkok on the 787 Dreamliner. Let’s forget for the moment that this 2-2-2 configuration on the new plane is something I simply don’t understand and that the surfaces of the B787 Business Class cabin are already destroyed: 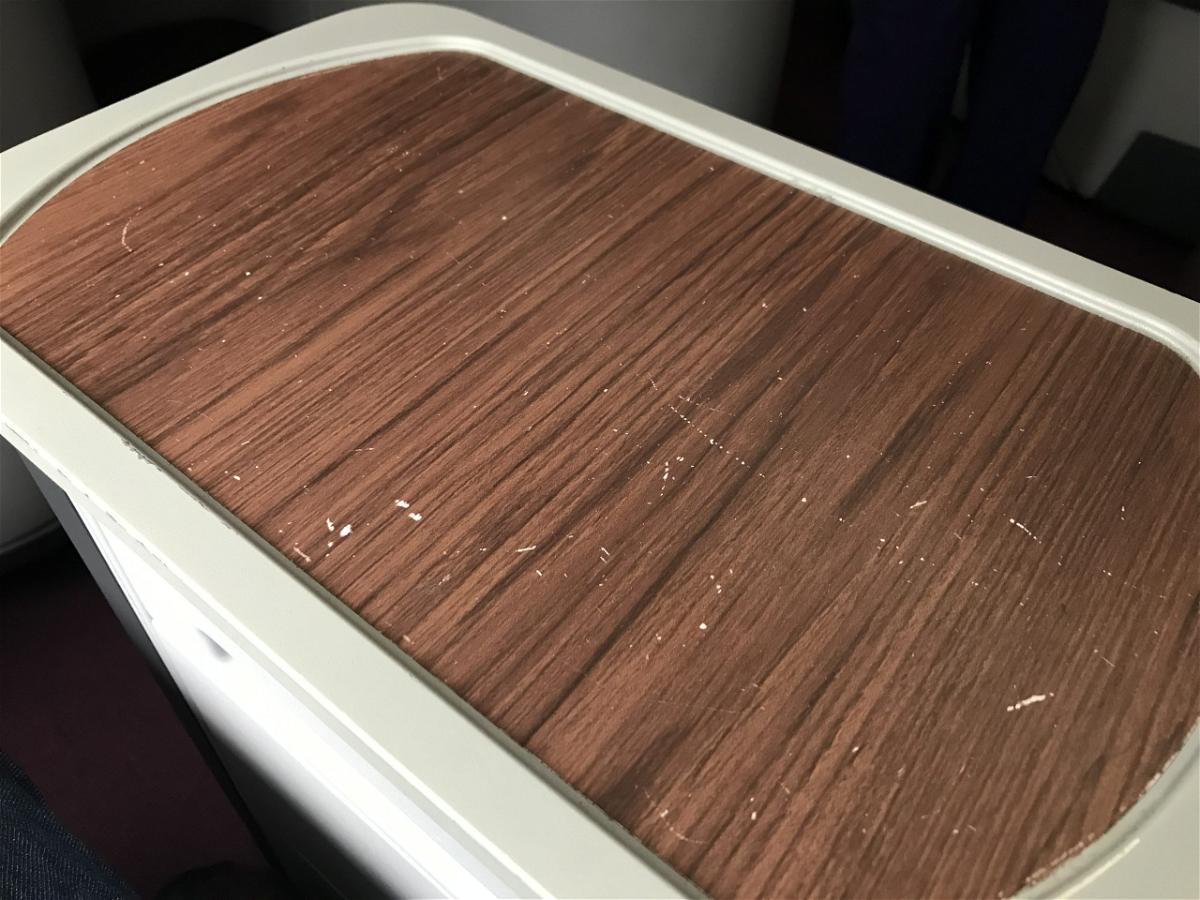 It would be easy to fix something like this and replace the surface but no, nobody cares.

The remote control was damaged and filthy as well: 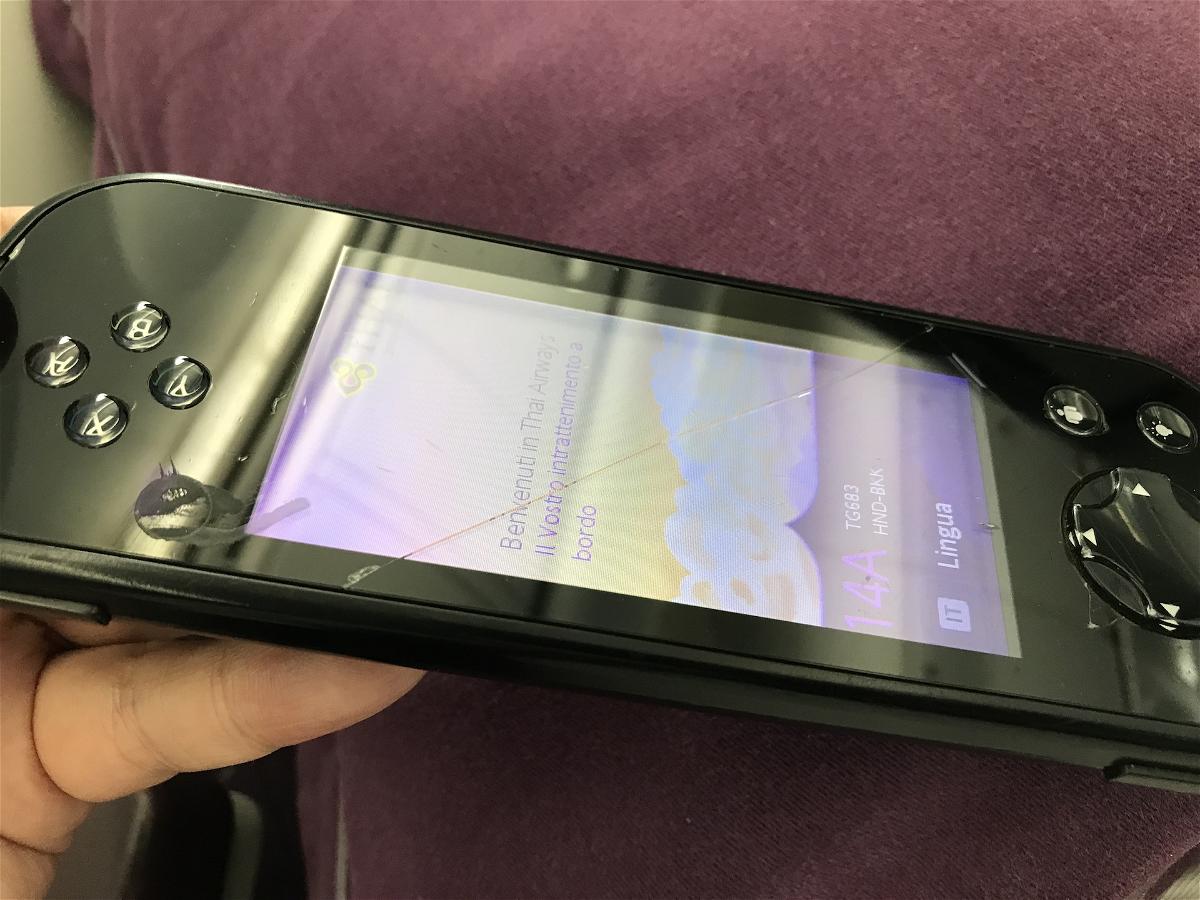 But the real letdown was once again the catering.

As it has become the norm with Thai Airways, passengers in Royal Silk were not presented with a menu so nobody really knew what was available in terms of beverages.

All of the meals were catered in Bangkok, and none of it was prepared fresh in Tokyo so all of the items were frozen, which is something we were to notice as soon as the appetizer was served.

The meal choices were communicated verbally by the crew:

You immediately notice the absence of anything Japanese on this Haneda departure, another sign that all the meals came in from Bangkok.

The appetizer was a raw prawn Thai style and a salad which was frozen solid: 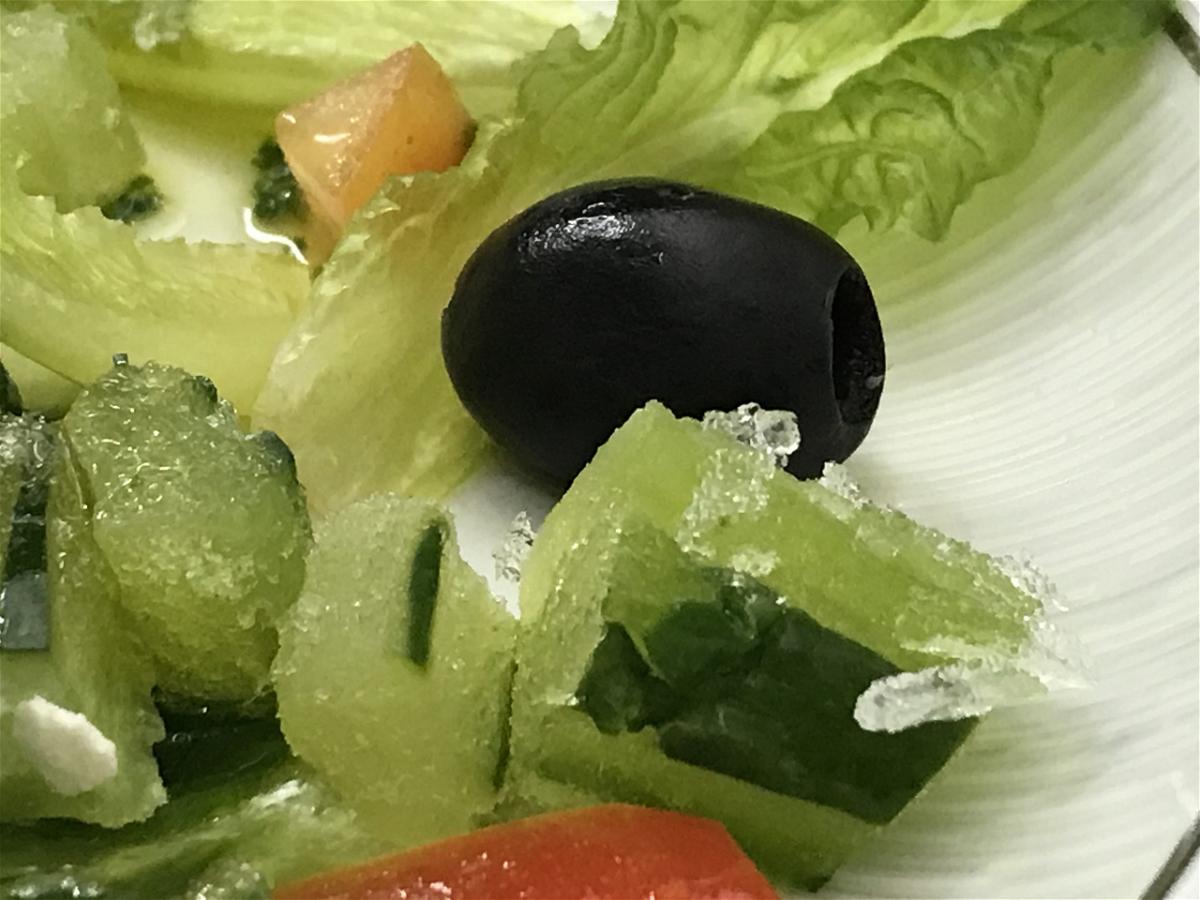 When I saw it was frozen solid I’m not kidding, even the dressing was hard as a rock in the little plastic container and so were the olives, tomatoes, etc. I informed the crew and they gave me another salad – just the same result with the ice crystals being even more clearly visible. This was a first for me.

I ordered the salmon for the main dish as it appeared to be the lesser evil and I simply wasn’t in the mood for Thai food. 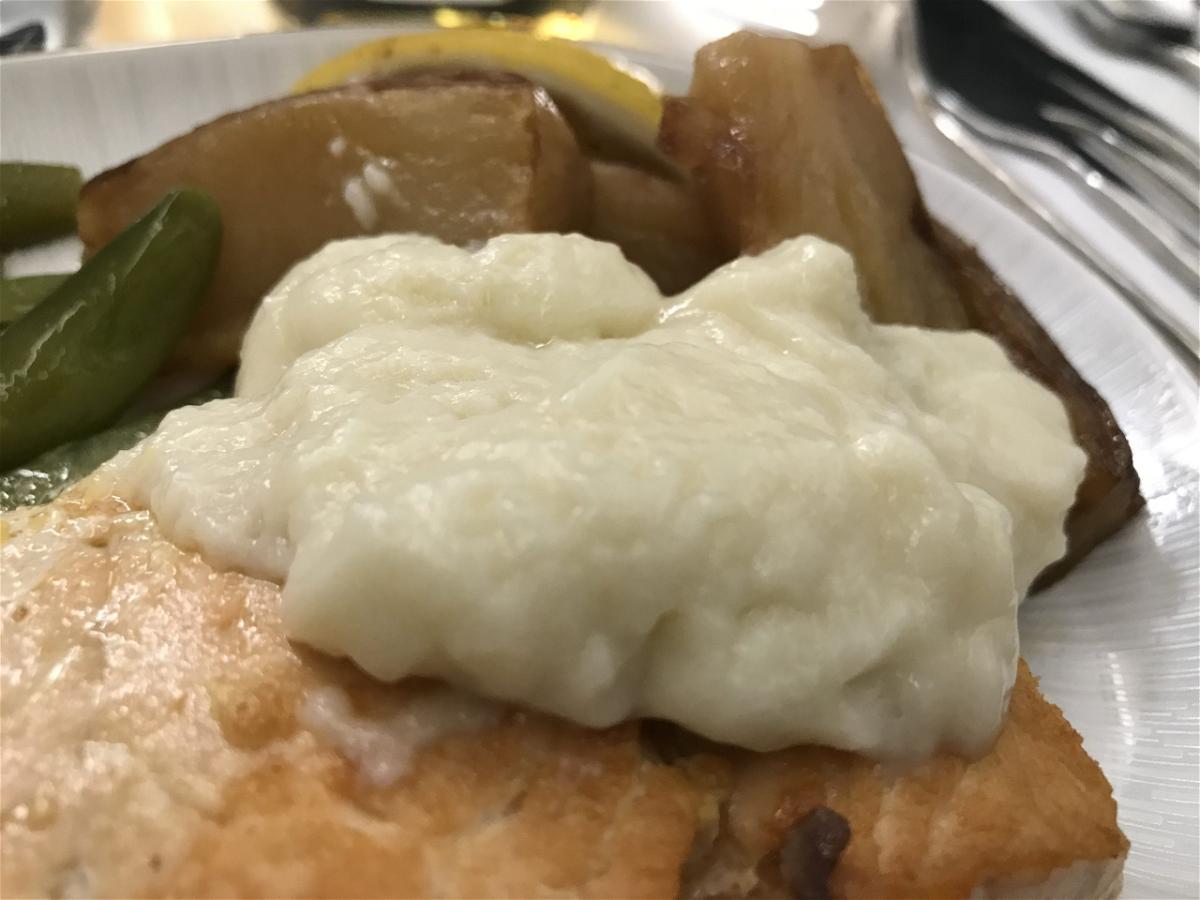 The salmon was, unfortunately, super dry, and you could literally kill with it. Such a shame and a waste of ingredients. The most disgusting thing was the gloopy sauce which looked exactly like snot and had the same consistency.

The Savior of the entire meal was the chocolate-caramel cake which was quite nice, and the crew served beverages throughout the flight, including Thai Milk Tea which was a nice touch as well.

I’m not entirely sure if I can fault the crew in any way here. Who is supposed to prepare the appetizers, and at what point? Surely, it can’t be enough to have the crew take the salad out of the freezer short before meals are served. And why freeze salad in the first place? That’s just insane.

Unfortunately, this wasn’t the only time Thai dropped the ball. On both my Frankfurt-Bangkok and Frankfurt-Phuket flights, the quality of the inflight meals has been lackluster as well. Undoubtedly THAI is ordering cheaper meals from their global catering partners or simply taking stuff from Thailand that is deep frozen and just reheated.

Why is there no menu in Business and even First Class? When you ask, it’s “because of Covid” which is absolutely laughable as Covid isn’t even a discussion point in Thailand anymore.

Thai Airways has finally reached the bottom of the barrel as far as onboard catering is concerned. What was served to Business Class passengers on Tokyo-Bangkok last week was absolutely disgusting and wouldn’t even see the light of day in many airlines’ Economy Class cabins.

The airline is apparently trying way too hard to conserve costs, but cost-cutting has limits, and it’s simply insane to free salads, let alone serve it frozen to passengers. TWICE!

I feel sorry for the very engaged crews on these flights. Contrary to the food, I feel that crew quality and engagement have gotten a lot better since the Thai Airways reorganization. No doubt a result of the carrier having let go a lot of the senior (old) staff, respectively bought them out.

Airfare of the Day -Business Class- SINGAPORE AIRLINES Jakarta to Amsterdam from $2,284

IHG InterContinental Alliance Resorts: Venetian & Palazzo Up To 50% Off Cyber Sale Through September 4, 2023 (Book By November 30)