With the implementation of the federal ‘Real ID Act‘ in the United States, travelers with standard drivers licenses issued by various U.S. states might soon require another ID document if they wish to fly domestically but the federal government just postponed the deadline yet again – to May 2025. 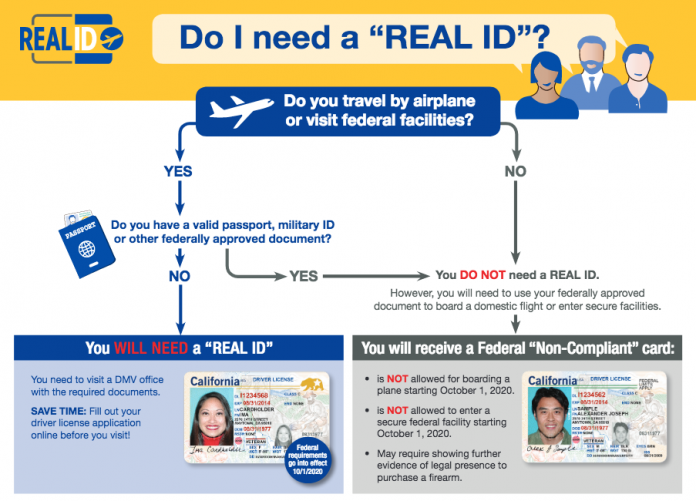 Individuals can also upgrade their current ID / Drivers License to the new REAL ID, which comes with a designation on it while non-compliant ID’s include the notion “Federal Limits Apply”.

The REAL ID was supposed to become compulsory from January 1st 2020, then it was postponed to 2022 followed by another postponement “due to COVID” to May 3, 2023 and now yet again to May 7, 2025 from which day on air travelers will require a new/updated “REAL ID” or a passport (among a few other accepted documents).

The Department of Homeland Security has published the announcement yesterday (see here).

States to have additional time to meet requirements
WASHINGTON – Today, the Department of Homeland Security (DHS) announced its intent to extend the REAL ID full enforcement date by 24 months, from May 3, 2023 to May 7, 2025. Under the new regulations published to execute this change, states will now have additional time to ensure their residents have driver’s licenses and identification cards that meet the security standards established by the REAL ID Act. As required by the law, following the enforcement deadline, federal agencies, including the Transportation Security Administration (TSA), will be prohibited from accepting driver’s licenses and identification cards that do not meet these federal standards.

“DHS continues to work closely with U.S. states, the District of Columbia, and the U.S. territories to meet REAL ID requirements,” said Secretary of Homeland Security Alejandro N. Mayorkas. “This extension will give states needed time to ensure their residents can obtain a REAL ID-compliant license or identification card. DHS will also use this time to implement innovations to make the process more efficient and accessible. We will continue to ensure that the American public can travel safely.”

The extension is necessary, in part, to address the lingering impacts of the COVID-19 pandemic on the ability to obtain a REAL ID driver’s license or identification card. REAL ID progress over the past two years has been significantly hindered by state driver’s licensing agencies having to work through the backlogs created by the pandemic. Many of these agencies took various steps in response to the pandemic including automatically extending the expiration dates of driver’s licenses and identification cards and shifting operations to appointment only.

Passed by Congress in 2005 following a 9/11 Commission recommendation, the REAL ID Act establishes minimum security standards for state-issued driver’s licenses and identification cards. Security standards include incorporating anti-counterfeiting technology, preventing insider fraud, and using documentary evidence and record checks to ensure a person is who they claim to be. Under the new regulations, beginning May 7, 2025, every traveler 18 years of age or older will need a REAL ID-compliant driver’s license or identification card, state-issued enhanced driver’s license, or another TSA-acceptable form of identification at airport 1security checkpoints for domestic air travel.

Since enactment of the REAL ID Act in 2005, advancements in technology have enabled TSA to make significant improvements in checkpoint screening, particularly in the areas of identity management, on-person screening, accessible property screening and alarm resolution. Through the deployment of technologies such as Advanced Imaging Technology (AIT), Advanced Technology (AT) X-ray, then Computed Tomography (CT), Bottled Liquids Scanners (BLS), and Credential Authentication Technology (CAT), as well as deployment of Passenger Screening Canines (PSC) and the rollout of TSA PreCheck®, TSA has continually advanced its security capabilities. TSA also increased its vetting capability through Secure Flight, a risk-based passenger prescreening program that enhances security by identifying low and high-risk passengers before they arrive at the airport by matching their names against trusted traveler lists and watchlists. REAL ID requirements will strengthen these improvements further by providing an additional layer of confidence in the identity of the traveler.

The U.S. – the most powerful country in the world – is now fumbling around for 17 years trying to put an ID requirement in place that was brought on the way a few years after 9/11. Let that sink in for a moment!

Then there was also the little mishap in California back in 2018/2019 when the state already issued 2.3 Million such documents accepting insufficient documentation which was supposed to include a residency verification.

This had to be corrected, and I believe when I applied I used a letter from the U.S. Department of Transportation that I received confirming a consumer complaint against an airline, which was, of course, accepted as “Document issued by a government agency”.

The Real ID requirement is actually quite restrictive, and you’re only able to get one if you’re in possession of a Social Security Number (obviously no problem for U.S. citizens and lawful residents) as well as valid Identification which includes as a minimum a valid foreign passport, valid U.S. Visa and most recent I-94 (definitely a problem for individuals with no or invalid immigration status).

If someone doesn’t have the required documents, certain states will still issue ID’s or even drivers licenses, but those will bear the designation “Federal Limits Apply” which also means airport security is a no go once the new regulations kick in. I can imagine this becoming a big mess as there are likely many folks with “unsuitable” ID’s in the United States. 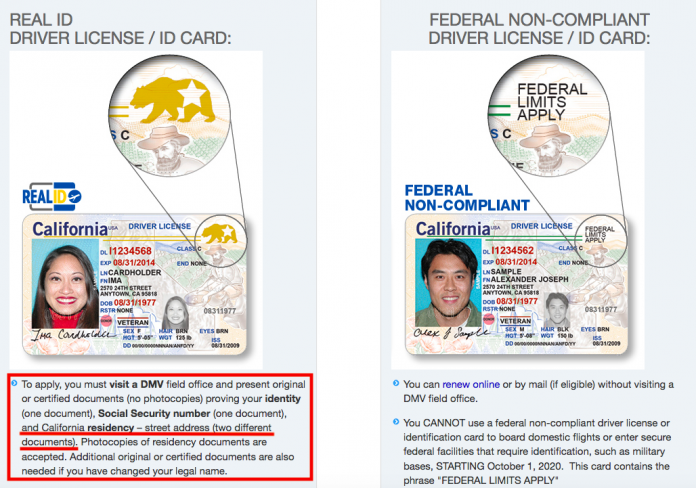 Acceptable Identification apart from the non-excluded driver’s licenses / ID’s include:

All foreign travelers obviously have a passport already, so it doesn’t concern them, and Permanent Residents will be able to use their PR Card (Green Card) as a form of identification.

Let’s assume individuals with these ‘unsuitable’ driver’s licenses won’t replace them with something secure they would then have to apply for a passport and carry it around which is a bit inconvenient.

For those not really desiring to do either, the cheapest and most convenient option is probably the Passport Card (see details here) which is a wallet-size card just like a driver’s license for a first time issue fee of US$65 (or $160 as a bundle with a real passport) that serves exactly like a passport for land- and sea ports-of-entry from Canada, Mexico, The Caribbean, and Bermuda. You can’t fly internationally with those, though.

I can’t see an advantage of applying for a passport card instead of just getting a REAL ID-compliant driver’s license or state ID unless you have an exclusive purpose for the border crossings as listed above.

There is quite a bit of controversy about this Real ID Act, but in my opinion, it’s always good when a country introduces nationwide standards for IDs that can be used for purposes of entering secure areas or other situations where it’s relevant to be in possession of a proper identification that can’t be altered. Imagine being a law enforcement officer and having to verify more than 50 different ID documents for the same country.

For purposes of being able to clear airport security, however, I don’t see why a properly issued state ID by the local DMV wouldn’t be enough in combination with a proper TSA search every traveler should receive anyway. Many countries, such as those within the Schengen zone, don’t require any ID for that despite there being laws in place that mandate citizens to have valid federal ID in their possession.

How can a country that is at the forefront of both civilian and military cyber capability not bring a simple ID document online almost two decades after congress passed this? Will we really see the Real ID come live in 2025? By then, the first 1-2 batches of REAL ID’s (including my own) that were issued years ago have already expired.