Foreign arrivals into Tokyo had a rough couple of days, as reported in many outlets and travel forums, so I already expected the worst when flying into Tokyo-Haneda Airport last night, and it was truly a nightmare. 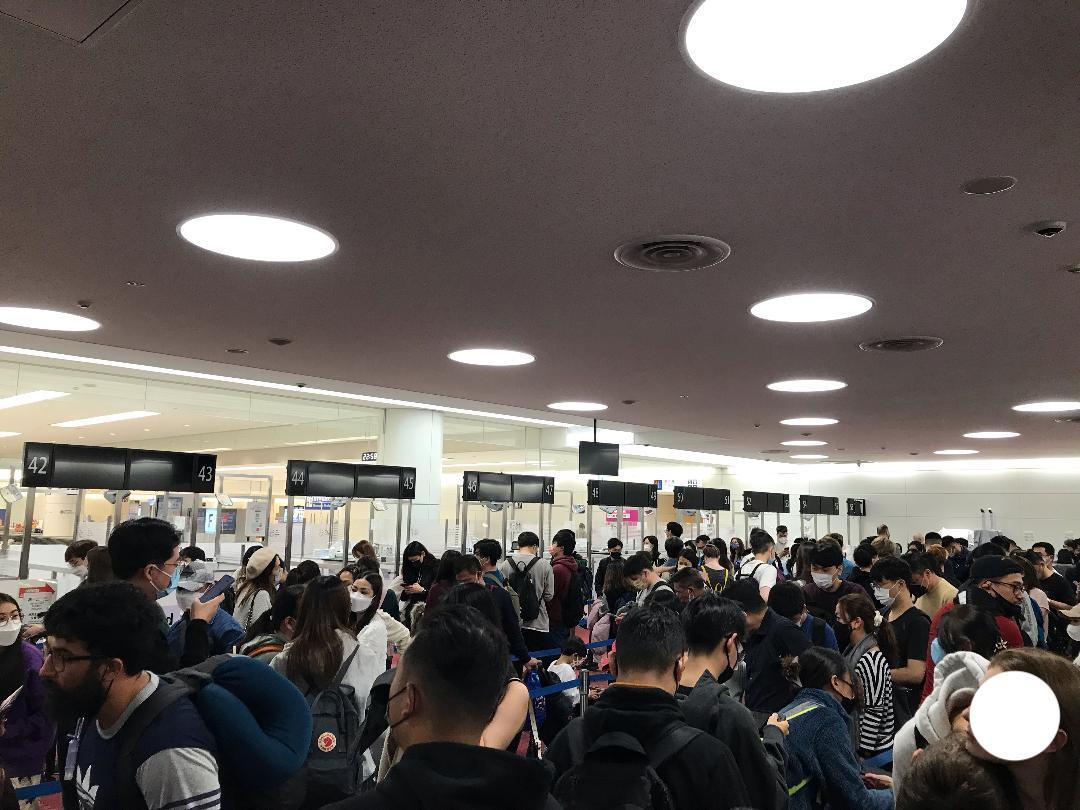 Due to overcrowding in the terminal (due to a lack of immigration staff), passengers were first held on the plane for an hour and then let into the arrivals hall, where another two hour long lineup awaited passengers.

What made matters worse is that there is no more public transportation from Haneda Airport after 23:30h so everyone was essentially stranded at the airport or forced to take a rather expensive taxi to their destination, if they could get one that it.

It’s unclear why there is suddenly such a bottleneck at Japanese airports when it comes to immigration and arrivals processing, but it was clear that there wasn’t even remotely enough immigration staff to handle the arriving passengers. 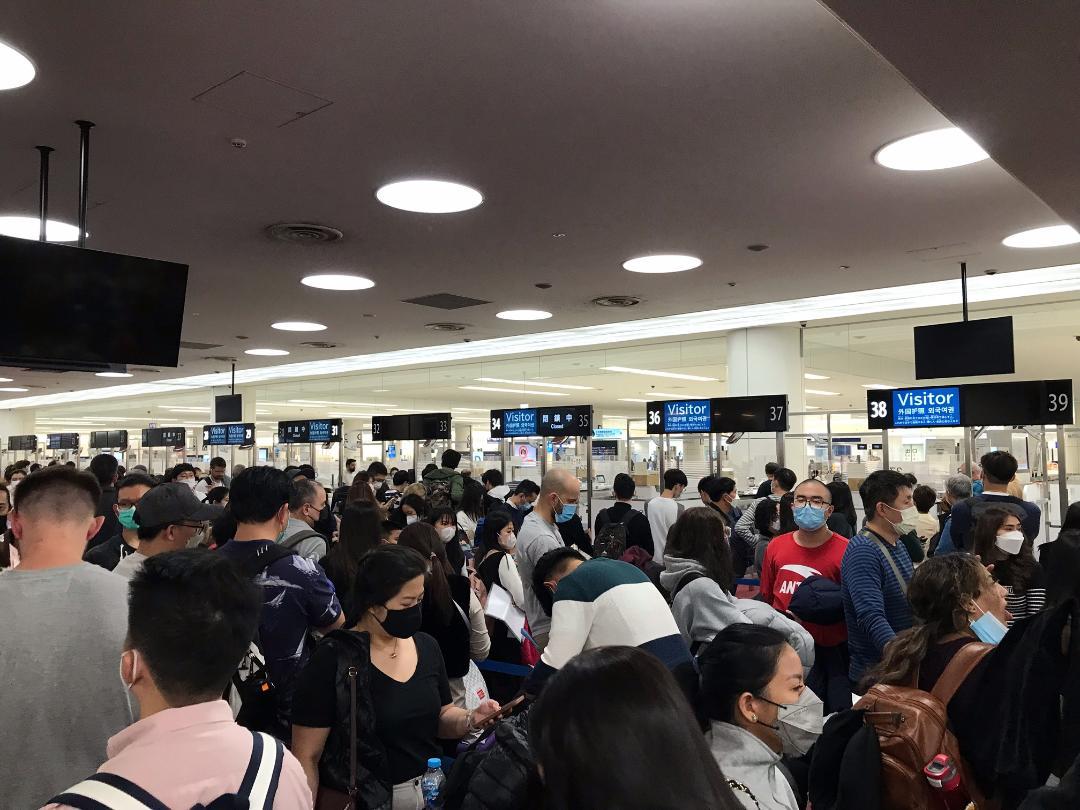 With all counters open (or at least 15 of them rather than the fluctuating number of 5-7) it would have been possible to process all people within an hour.

People, especially families and elderly took a break sitting down on the floor while waiting in the never-ending line: 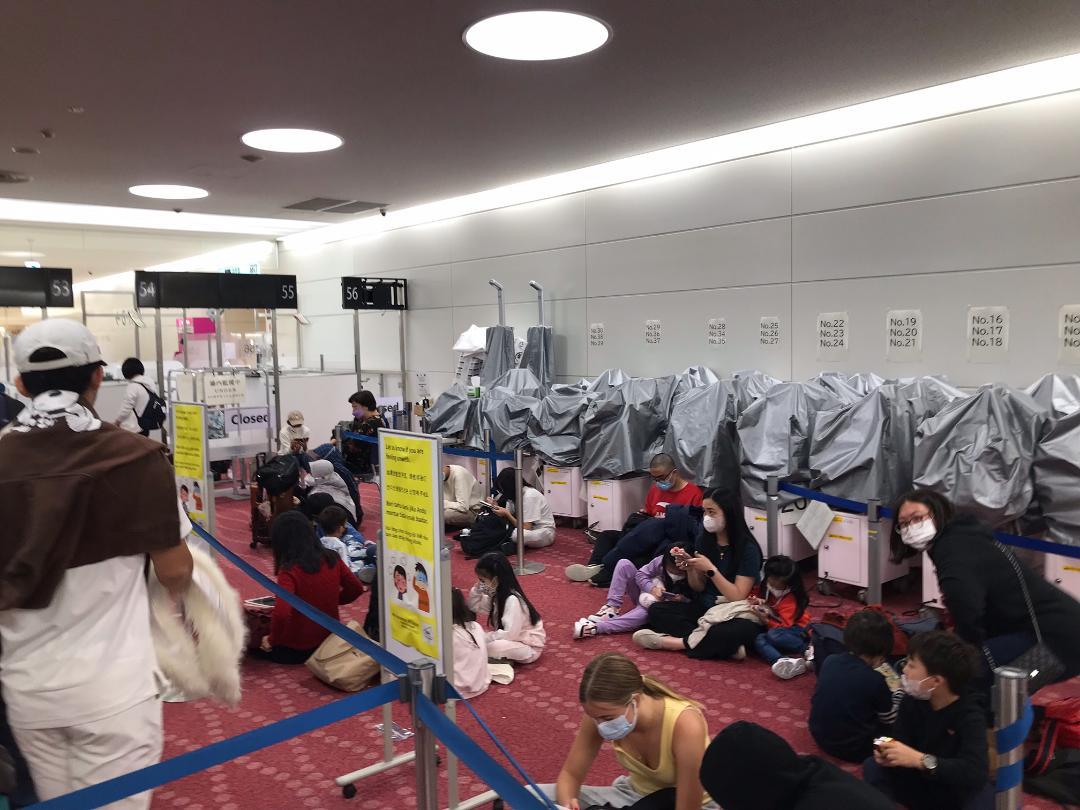 As can be seen in the back, the problem was solely the visitor’s line. The line for Citizens and Re-Entry permit holders had no wait whatsoever and Japanese citizens could use the machines as well. 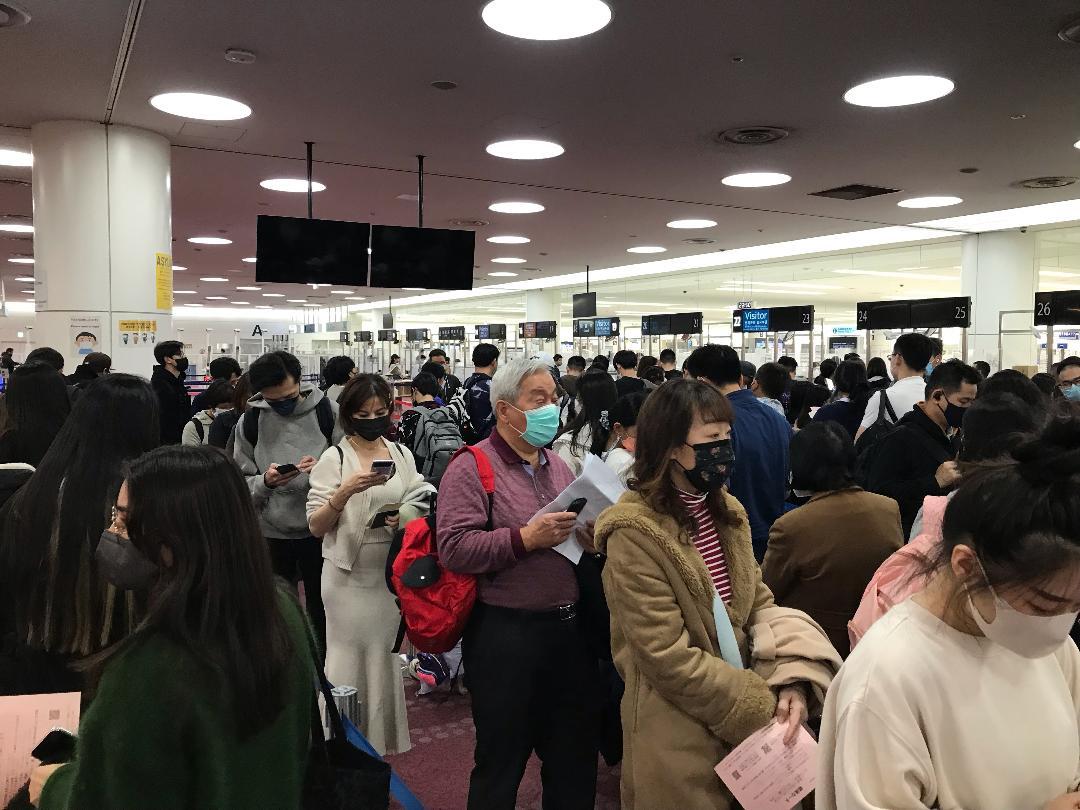 The most ironic and ridiculous thing is their signage to keep a distance from other passengers: 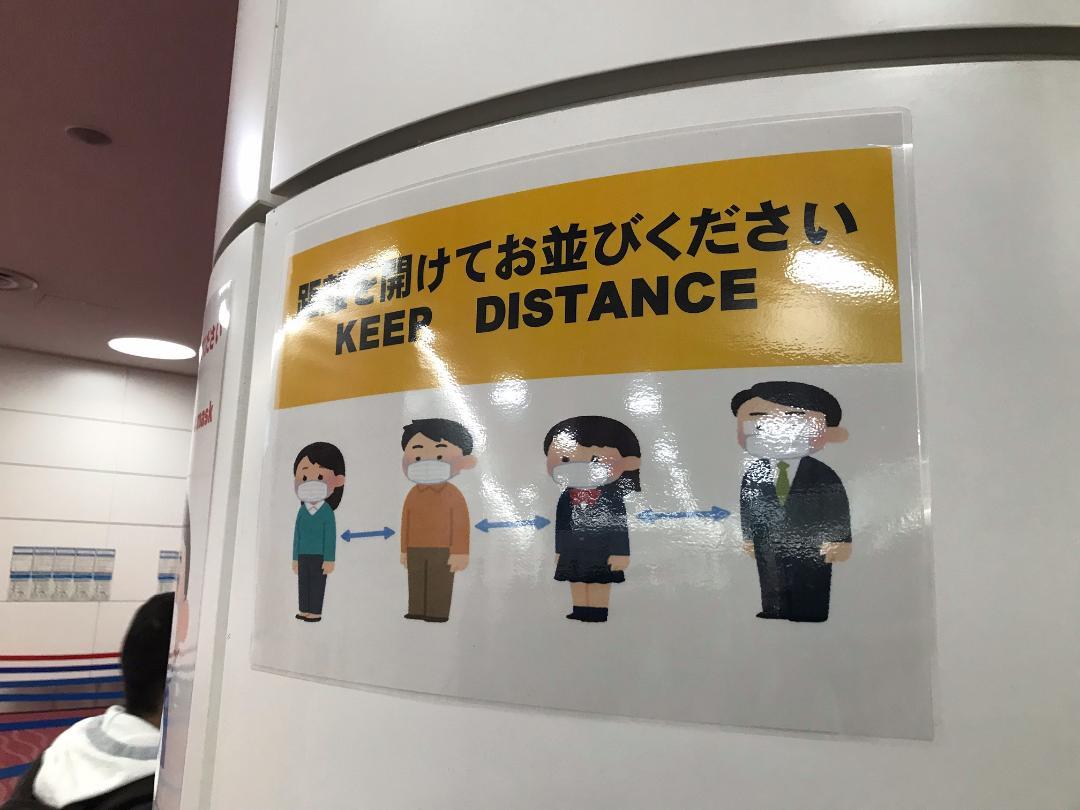 With so much coughing and sneezing going on, the immigration hall was more like an incubator for the flu and covid, but hey, at least they reminded people to keep a distance and wear a mask.

This time my timeline is rather interesting because I actually received an arrivals stamp (sticker) dated the day after my arrival as we crossed midnight while waiting in line.

The UBER option was really a blessing in disguise, as the price was lower than a regular taxi, and I got a nice big Alphard. 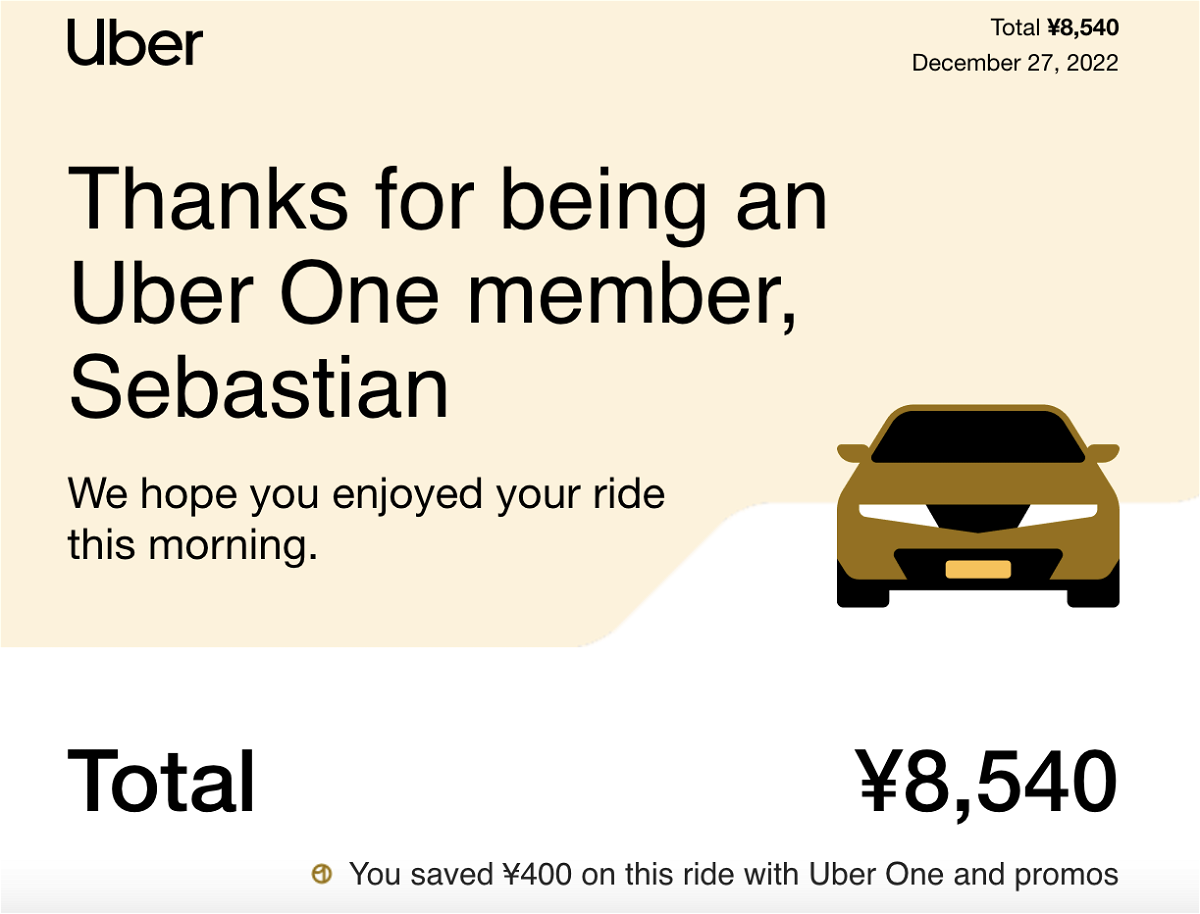 So the incompetence of the Japanese Immigration Department cost me $65 and several hundreds of other passengers the same. I’ll try and claim this under Trip Interruption Insurance and see if one of my credit cards will cover it.

I wasn’t in the mood to wait until 5 am when the Keikyu Line reopened to go home by train, it was a long day already, and I was just tired to play these games.

Japan reopened in November after being sealed off from the outside world for almost two years. Since then, I have entered on three different occasions, both in Narita and Haneda Airport and yesterday’s experience was definitely an outlier. I found that Narita was better organized than Haneda though.

There is really no excuse for the immigration department. They know exactly how many passengers arrive and should have the appropriate amount of officers rostered. As I said in other articles before, these are government employees, and the government doesn’t suffer from staff shortages. It’s simply negligence that cost many people a lot of money.

I can only suggest anyone to plan adequate time in the future as things might go either way when it comes to immigration. I will certainly not use any flights anymore that arrive at 10 pm or later as I’m not in the mood for any more expensive taxi rides.

The big day is finally here: Japan is, at last, opening its borders to individual tourists again as of midnight,...

The Japanese Government is considering to once again return the travel discount campaign they have been running in previous years,... 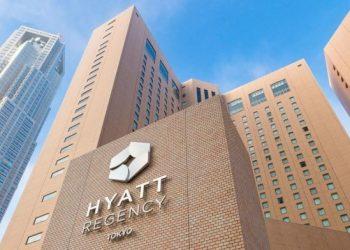