Southwest Airlines still experiences a terrible systems meltdown that has caused widespread outrage from passengers, employees, politicians, and even other carriers in the industry. Over 2500 flights have so far been cancelled and countless more delays, hundreds of thousands of passengers affected and the search for why all this happened is on.

Although not a legacy or fully service carrier, Southwest has become extremely popular over the last decade despite their antics, such as no confirmed seat assignment (enough reason for me never to fly Southwest).

But now things have gone wrong in a terrible way, and people are scrambling for answers.

There was a very interesting article in the New York Times today which looks beyond the sensationalizing angles of the story.

Delta Air Lines, American Airlines and United Airlines each canceled fewer than 40 flights on Wednesday, according to FlightAware, a flight tracking service. Delta had the fewest with only 15 cancellations.

At Southwest, it was a very different story.

More than 2,500 flights, or 62 percent of its planned flights on Wednesday, had been canceled, according to FlightAware. And Southwest said in a statement on Wednesday that it planned to fly one third of its scheduled flights for the next several days as it tries to return to normal operations, meaning it would continue to cancel close to 2,500 flights a day. Some passengers, unable to rebook Southwest flights, rented cars or spent hundreds of dollars to buy tickets on other airlines.

So what caused the meltdown?

Southwest uses a “point-to-point” route model that often lets passengers fly directly from smaller cities and regions without having to stop at a central hub like Denver or New York. Point-to-point flights cut travel times by eliminating the intermediate stop — typically a big advantage for travelers who are not flying from major metro areas.

Other large carriers like United and American rely on a “hub-and-spoke” model in which planes typically fly from smaller cities to a hub airport where passengers change planes.

With a hub system, there’s a ready pool of crew members and pilots who can report to work at a major airport, said Mike Arnot, an industry analyst. That makes it easier to regroup after a storm, he said. Planes also are kept closer to their home airports, rather than being spread across the country. …

Southwest’s cancellations created a giant snowball effect that rippled across its carefully choreographed network, leaving planes and crews scattered across the country, he and other analysts said.

“The only way to reset is to get the planes and crew back to where they should be,” Mr. Arnot said. “And the only way to do that is to cancel a huge amount of flights.” …

Southwest’s system couldn’t keep track of where its crew members and pilots were after so many flights were canceled, Mr. Arnot said.

Pilots and crew members looking for their next assignment waited hours — nine hours in one case — to speak to staff members at Southwest’s overwhelmed operations center, said Casey A. Murray, president of the Southwest Airlines Pilots Association, the union that represents the almost 10,000 Southwest pilots. With nowhere to go, hundreds of pilots and crew members slept in airports next to passengers and luggage, he said.

“Once one card falls, the whole house falls here at Southwest,” he said. “That’s our problem. We couldn’t keep up with the cascading events.”

Mr. Murray said the union had been urging the airline for years to update “I.T. and infrastructure from the 1990s.”

“We’re seeing these meltdowns occur with more severity and more frequency and this past weekend was the exclamation point,” he said. The airline also suffered a technology meltdown in June 2021 that resulted in a day when half of its flights were delayed and many were canceled; it took days before the situation could be resolved. In October of that year, it had similar issues and canceled more than 1,800 flights over one weekend. …

What is going on at Southwest that they are constantly plagued by these problems and apparently don’t get it under control. Is it just cost-cutting, refusal to renew the archaic IT infrastructure or is there something else at the heart of the company that prevents modern times and technology from providing a safety net for the carrier?

There has also been a statement on Twitter by Southwest CEO:

On the heels of wide-scale disruptions, we're working diligently to Safely recover our operation & accommodate displaced Customers & Crews. We know this is unacceptable & sincerely apologize. If your travel was impacted, explore self-service options here: https://t.co/B6L8HR9Yqc pic.twitter.com/mLWndYMned

I can’t see Southwest getting out of this mess without inflicting much pain on itself and passengers. That they don’t endorse tickets over to other airlines is not only highly detrimental but grotesque as well. Just another reason why I never flew the airline and most likely never will. I want protection when things go wrong.

The only thing the airline can do now is to reset their entire system, mass cancellations or even ground the entire fleet for 1-3 days. During these days, no passengers would be transported, all tickets refunded and planes, as well as crew, repositioned. Needless to say, that leaves a lot of affected, unhappy passengers during the busy holiday travel season.

Flight crews travel all over the country in a zick-zack fashion rather than just returning to their point of origin. U.S. airlines send flight attendants and pilots all over the country. They complete one flight and then work another one, often even on different planes.

That such a system is ripe for disaster as soon as there is even a slight interruption is pretty obvious. Let alone many pilots not living in the city where they’re based but outside. You often see crew commute from let’s say Las Vegas or Phoenix, where living is much cheaper and commute to LA or San Francisco.

In the past, I blamed Southwest and Spirit for their own misfortunes with exactly the same repeating issue time and time again. Once again, Southwest has brought this upon itself. The customer is the one who has bear the brunt of this chaos, oftentimes without adequate or any compensation.

It’s way overdue that the Department of Transportation steps in here and does its damn job which is to regulate the carriers. It can’t be that the consumer in the U.S. always gets the short end of the stick whenever airlines have operational problems. In Europe airlines would be forced to pay a fortune in compensation and ground care services by now. In the U.S., people sleep on terminal floors, go back home and there are no consequences for the carriers.

Southwest is now having a full week of cancellations and delays. It’s best to have a close look at your flights and possible connections before going to the airport and ask again before checking in if there is any delay for this flight on the horizon. Especially when checking baggage, this might prove to be a good step to prevent not seeing your bags again for several days.

It’s also a good time to revisit travel insurance coverage through a variety of credit cards in case of an interruption. Benefits can range from coverage for hotel costs, replacement items for lost baggage or lump sum payments for a certain period of delays. Usually, the top line credit cards have travel coverage included, but some (most) of them require the flight has been paid with said card. 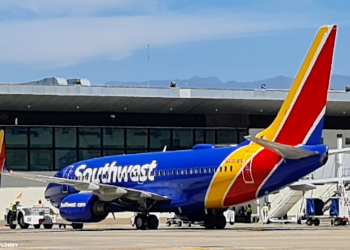 Southwest Airlines experienced a week-long meltdown around Christmas and the New Year (read more here) after their crew scheduling automation...