American Airlines has a new offer for buying some AAdvantage miles in February. You can buy up to 60K miles and get 50% bonus on purchased miles for up to 90K total miles. 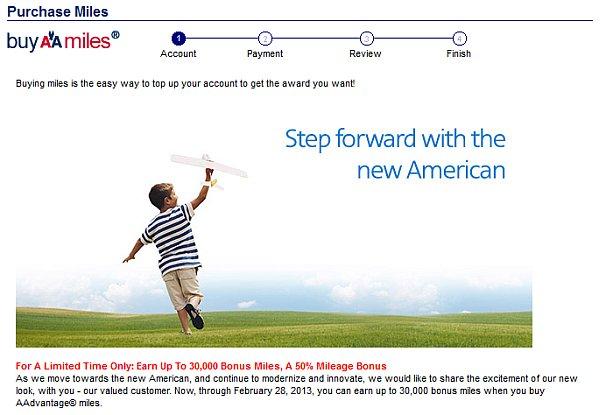 END_OF_DOCUMENT_TOKEN_TO_BE_REPLACED

American Airlines has been on the very generous mood with status matches, extensions, and double elite qualifying miles offers during its bankruptcy. LoyaltyLobby reader just forwarded me an email that he had received from American.

American has made an offer for instant Platinum status until May 31, 2013, and extending it until February 28, 2014, for flying 12K miles or earning 12K elite qualifying points. And just for registering for the offer, American would deposit 20 500 mile upgrades that can be used to upgrade around 10K flown miles on American from economy to business.

END_OF_DOCUMENT_TOKEN_TO_BE_REPLACED

There are some blackout dates that are property specific. The base number of miles (500) is doubled. The doubling of miles doesn’t apply to the elite bonuses.

END_OF_DOCUMENT_TOKEN_TO_BE_REPLACED

American Airlines had number of offers for double elite qualifying and redeemable miles in 2012. The airline also had a direct status match offer for Executive Platinum status for United 1K’s and later an expedited requalification offer as well.

END_OF_DOCUMENT_TOKEN_TO_BE_REPLACED

Over the years, I have made lot of purchases using airline related shopping portals during promotional periods. Now, American Airlines (or Cartera) is offering 100 bonus miles just for signing up, 300 bonus miles for any purchase, and extra 600 bonus miles for a purchase of $100 or more. You can access this offer here.

This offer is only available for those that haven’t signed up for AA’s online shopping portal previously. These free miles will extend the validity of your American Airlines miles if you haven’t had or not going to have any activity for a while.

END_OF_DOCUMENT_TOKEN_TO_BE_REPLACED

American Airlines just introduced their first new logo since the 1960’s and change in plane livery as well.

You can watch a rather longish video with lot of rendered images narrated by Mr. Horton at http://www.aa.com/newamerican.

END_OF_DOCUMENT_TOKEN_TO_BE_REPLACED

American Airlines & Qatar Airways have reached an agreement about codesharing each others flights. Qatar Airways is a Oneworld candidate and is expected to join the alliance in late 2013/early 2014. You can read AA’s press release about this agreement here.

American Airlines will place its code on Qatar’s flights from the United States and major European gateways like London to Doha, and beyond.

END_OF_DOCUMENT_TOKEN_TO_BE_REPLACED

Airline Cabin Lounges from The Past: American, Qantas & Continental

There was an interesting post yesterday with some photos on Cruise Line History website regarding airline cabins back in the day of glorious air travel (that was unaffordable for most).

It makes you wonder, what went so wrong with the airlines, especially with the US ones, that made them buses of the sky of today?

This actually looks really nice and could be a lounge somewhere in 2013. Bet that the FA is still working for AA?

END_OF_DOCUMENT_TOKEN_TO_BE_REPLACED

American Airlines has just started a new promotion for buying or gifting AAdvantage miles. You or the receiver can earn maximum of 15K bonus miles for buying/being gifted 40K miles. The price of a mile is 2.2 cents under this offer that is valid until January 31, 2013. 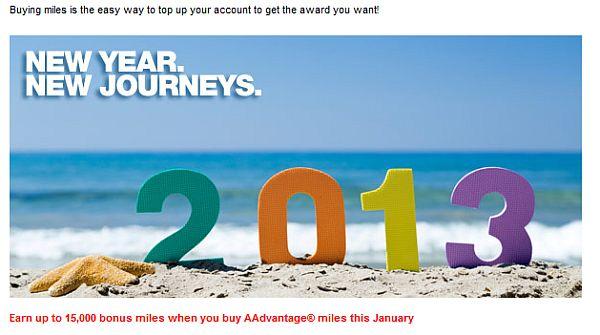 You can only buy or gifted total of 60000 AAdvantage miles per calendar year. If you need to purchase more miles, I would suggest opening an account for an immediate family member. For ticketing purposes, it would be better if you share the same last name.

END_OF_DOCUMENT_TOKEN_TO_BE_REPLACED

As is often the case with these Facebook apps, you need to give them permission to access some of your info.

The questions are super easy. You just need to identify your top two airline programs, what status you have, and what counted the most for making the selection. Then you can also leave a note about your other favorite programs outside the airlines.

You then just need to submit the short survey and the miles will be deposited in your account in 6 to 8 weeks.

After you have completed the app, you can disallow the app to access your data and unlike both AA and AAdvantage, if you so prefer.

Very easy way of getting 500 free American Airlines miles and don’t take too much of your time.

This is also a good way to extend the validity of your miles by another 18 months if you don’t have too much AAdvantage activity.

Once airlines unbundled most of the perks that used to come up with the flying like free checked bags, they have started to introduce various packages and options to reintroduce them as add-ons. You can read more about these options on AA’s website here.

The new booking interface has been done an infrequent flyers point of view. As I have written before, I much prefer booking my air tickets on non-airline sites for greater price visibility and ability to compare air carriers. Of course, airlines don’t like this. Airlines would prefer that you book on their website so that they can “merchandise” their product using the word that American Airlines spoke person used.

The price difference between Choice and Choice Essential is $34. If you are going to check a bag and would need to pay $25 for doing so, the price that you are paying for waiving the change fee is $9.

Then there must be quite a few business travelers that will buy the new Choice Plus just to get the extra award miles….

Up To 2000 Bonus American Airline AAdvantage Miles for Online Purchases

It is time of the year when there are offers from most of the airline and hotel related online shopping malls for bonus miles.

Between November 18 and December 17, you will earn 500 bonus American Airlines miles for every $250 in purchases that you make through the Advantage eShopping mall. These are in addition to the regular miles that you would earn from the purchases. The bonus miles are capped at 2000 that is basically $1K in spending.

This offer is only open to AAdvantage members that are enrolled to the eShopping mall by November 18, 2012.

You are essentially getting 2 extra points per dollar spend. The way I usually work these mall promotions, is to put a dollar figure to the mile earned so that I can compare them to straight cashback malls. Sometimes these airline related malls are better and sometimes they are not.

I wrote an article about getting cashback for your travel purchases and it does apply for most of other online purchases as well. You can use sites like CashBackHolic and Evreward to check the cashback percentages among multiple online malls.

American Airlines has a new Buy & Share AAdvantage Miles Holiday Offer up. AA has upped the yearly limit of buying miles to 60K and you can get up to 50% bonus on purchased miles. This offer is valid until December 31, 2012.

Please note that the AAdvantage account can only receive a combined (bought or gifted) maximum of 40K miles per year that has now temporarily been raised to 60K. You can always open an account for each family member, however, to get around this limitation.

American Airlines has a competitive award chart and as long as you totally avoid British Airways and to some extend Iberia flights, there are no fuel surcharges. On all other airlines, AA only charges actual charges/fees for award tickets

This is the best offer for 2012 to purchase American Airlines AAdvantage miles. I am not a huge fan of AA’s very restrictive routing and stopover rules, but the miles are very worthwhile for certain award redemptions.

Now, Virgin America has a status match campaign that is targeted to United And American frequent fliers. Virgin America matches to their Elevate Silver and Gold levels depending what status you have with United or American. You can access this offer here.

Email us at statusmatch@virginamerica.com with your Elevate number and oneof the following:

Here are the benefits of the Silver and Gold Elevate statuses:

The main benefit for me would be the upgrades to Main Cabin Select that includes complimentary food and booze. You could check one complimentary bag at Silver level and 3 at the Gold one.

The problem that I have with the program is on the redemption side. The “value” of the miles is capped around 2 cents when used for Virgin America flights. There is no fixed award chart. The number of the Evelate points required is entire dependent of the airfare. You can read more about this here.

You can also use points with Virgin Australia and Virgin Atlantic. You are required to pay for very high fuel surcharges on these two airlines. You can read about more these two partners here.

I will most likely do a status match that I would purely use for complimentary lounge access with Virgin Australia.

The Virgin America’s product is good, but the Elevate program is not a very good one with partner awards.

Here are the full terms and conditions of this offer:

*The following restrictions will apply to Elevate Status Benefits available during the Status Match period through April 30, 2012: a) Matched members will not receive 25% off personal discount codes. b) Matched members will receive one complimentary day pass to the Virgin America airport lounge at LAX. c) Matched members may not have access to all reciprocal benefits on Virgin Atlantic and Virgin Australia that require the member to present their membership card.

1. Please allow between 7 to 14 days from application to update your Elevate status, and please note that incomplete applications may not be considered.

All other trademarks and registered trademarks are the property of their respective owners.