Hilton just launched their latest ‘Resort Escapes’ promotion. You can get a free night certificate after five night contiguous stay at any of the more than 100 participating properties or two certificates after ten night stay. Alternatively you can complete two five night resort stays. This promotion is valid from December 1st, 2011 to April 30th, 2012. The free night certificate(s) are valid for 6 months after earning them.

END_OF_DOCUMENT_TOKEN_TO_BE_REPLACED

Ethiopian Airlines (ET) is finally joining Star Alliance on 13th of December, 2011. The airline was accepted to be a member of Star already more than a year ago.  The airline is based in Addis Ababa and operates to more than 60 international destinations from there. Ethiopian serves more African destinations than any other airline.

END_OF_DOCUMENT_TOKEN_TO_BE_REPLACED

New Offer from US Airways for Buying Dividend Miles at 1.75 Cents per Mile – Capped at 80K.

US Airways already mistakenly leaked the web page couple of weeks ago about this promotion that started today. At the time they took the web page down. 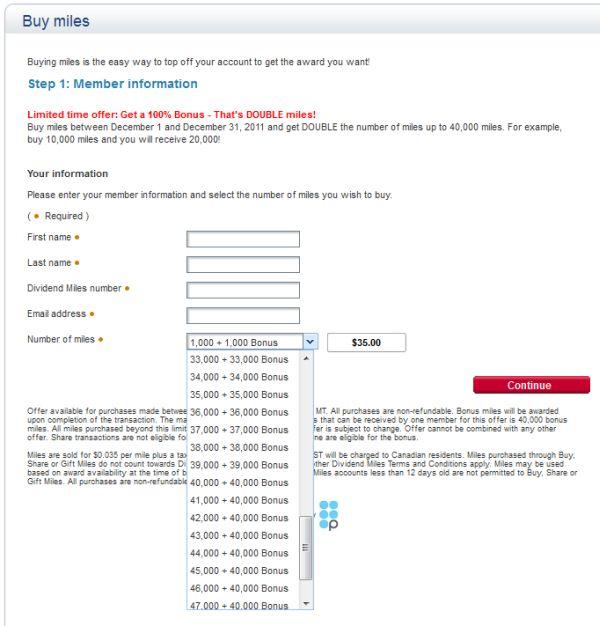 END_OF_DOCUMENT_TOKEN_TO_BE_REPLACED

Buy up to 10K Delta MQM’s (Medallion Qualifying Miles)- Good Way to Top Up Your Account if Short On Time.

When I was looking for options getting few more Delta MQM’s for the year, I came across this brand new offer from Delta. They are now selling MQM’s in the chunks of 2500 for $$$’s. Overall it is good to have options for acquiring MQM’s.

Last year I made a Diamond status with Delta due to numerous cross country trips. This year, however, zero chance as I moved out of the US this past spring. My current MQM is at 48K+. SkyTeam Elite + status might come handy at times and it would require at least Delta SkyMiles Gold status which requires 50K MQM’s.

END_OF_DOCUMENT_TOKEN_TO_BE_REPLACED

Starwood is again running MasterCard affiliated promo ‘Two Days of Happy’ 4MCFN in the Asia Pacific region. After five nights during the promotional period the SPG member will receive one promotional fee night award, or after nine nights two promotional awards. The stays must be reserved and paid using a MasterCard, and must occur between November 29th, 2011 and 15th of March 2012. These promotional awards can be redeemed from January 1st, 2012 and are valid until 10th of April 2012. The full terms and conditions of this promotions can be found at http://www.spg-asiapacific.com/2daysofhappy/en/terms.html  and the frequently asked questions at http://www.spg-asiapacific.com/2daysofhappy/en/faqs.html.

END_OF_DOCUMENT_TOKEN_TO_BE_REPLACED

There haven’t been too many bonus points offers at Hyatt this year compared to previous years when we were borderline bombarded with G and other bonuses. Now, Hyatt has launched a limited time winter bonus offer of 1500 bonus Hyatt Gold Passport points for stays at Hyatt Summerfield Suites, AVIA, and Hotel Sierra properties. The promotion runs from November 22nd, 2011 to January 8th, 2012.

Get the bonus you deserve this holiday. Whether your business travel closes out in 2011 or kicks off in 2012, get a bonus from Hyatt when you stay at more than 50 participating Hyatt Summerfield Suites, AVIA, and Hotel Sierra properties. Stay between November 22, 2011, and January 8, 2012, and receive 1,500 Hyatt Gold Passport bonus points per stay. Simply request Offer Code 1500GP at time of booking.

END_OF_DOCUMENT_TOKEN_TO_BE_REPLACED

Hilton December Sale – 20% to 33% off of Best Available Rate + 1000 Bonus Hilton HHonors Points for Stays of Two Days or Longer.

Hilton is very active on their limited time sales. Just came across this latest one when I was searching for Hilton properties in the United Arab Emirates for later this month. This promotion is available worldwide. Apparently, the set discount for Americas is 20% and the maximum elsewhere is 33%. You need to book at least seven day in advance for stays between December 8th and January 8th. Stays of two days or longer will also receive 1000 bonus Hilton HHonors points.

What is weird about Hilton’s websites is the fact that their UK website has far clearer display of properties that participate to this promotion and their prices. The US website doesn’t have this functionality. If you are planning to book a Hilton stay during this period, it does pay to visit Hilton.co.uk and can use the following direct link. http://bit.ly/tXTFGW

END_OF_DOCUMENT_TOKEN_TO_BE_REPLACED

Yesterday I was researching options for hotels in Bangkok and came across very attractive rate for Renaissance hotel, where I have stayed at few times before. The price on the Priceline was $69 compared to the price of 4700 THB (around $150) found on Marriott.com. I had never used Priceline before as a comparison site when doing the guarantee. You have to distinguish between the opaque side that none of the competitors match as it is by bidding only and the traditional one where the prices are shown without having to bid.

END_OF_DOCUMENT_TOKEN_TO_BE_REPLACED

This offer has been discontinued by Accor. You can still get A-Club Gold status just by signing up. https://loyaltylobby.com/2011/11/25/sign-up-for-a-free-accor-a-club-gold-membership-using-promotional-code-aclubfrohmygold2011/

Couple of days ago I wrote about an offer from Accor that would give you an instant Accor A Club Gold status just for signing up. Apparently, they have even better offer going on right now. You can get an instant Platinum status using an offer code FFPAFS04C. 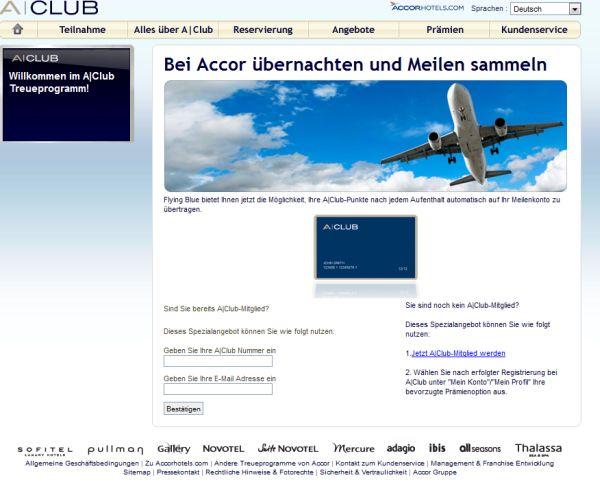 If you have an existing account all you need to do is to use the following link and just input your A Club number and an email address. You will shortly receive a welcome email welcoming you to Platinum status with Accor Hotels.

END_OF_DOCUMENT_TOKEN_TO_BE_REPLACED

Starwood has already had for more than a year their Moments-program where SPG members can either purchase or bid for wide variety of events like concerts, golf related events, shows etc.

There are two ways to “purchase” these and you always have to pay using Starpoints. Some of the events are purely sold using auctions, and thus the price is never knows before the auction ends. It is wise to bid only at the very last minute. The others have the straight purchase price as shown in Starpoints.

END_OF_DOCUMENT_TOKEN_TO_BE_REPLACED

Over the years I have visited the United’s Bangkok City Ticket Office (CTO) several times for various reasons. In the past, one had to sign a so called “bluey” when upgrading someone else using one of the Systemwide upgrade instruments.  Also, issuing an award ticket to someone who doesn’t share the same last name with you, used to require this very same process. I have always received very good service either over the phone or during the visit. They had just received some award from United for their 25 years of service.

The United’s CTO in Bangkok is not actually United at all, but rather their General Sales Agent (GSA) called Air Transport Service. They are, however, able to issue all kind of tickets and help with Mileage Plus related issues as well. You should be able to use paper vouchers there too, although I have never tried.

END_OF_DOCUMENT_TOKEN_TO_BE_REPLACED

It never hurts to have a Gold status with Accor just in case you happen to find a great price at one of their hotels or to be in a place where you don’t have your favorite chain represented. Accor has pretty good coverage in South America, Europe, and in part of Asia.

Last year they run a promotion for instant Platinum status. Right now they have a promotion that gives you an instant Gold status with Accor’s A Club. All you need to do is to plug in the promotional code ACLUBFROHMYGOLD2011 when you sign up.

END_OF_DOCUMENT_TOKEN_TO_BE_REPLACED

Club Carlson has a very exciting promotion going on for Europe, Middle East, and Africa until December 15th. You only need half the number of required points for an award night. You need to use promotion code 50REDEEM when making the redemption booking. This offer is valid for stays during Friday, Saturday, and Sunday only. 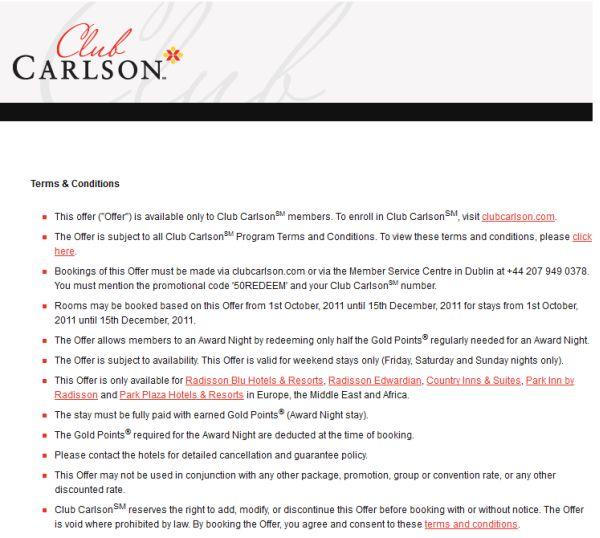 This is an excellent deal to save on award nights. You might be able to combine this with the offer I wrote about yesterday – get 9000 bonus Club Carlson points back per award stay.